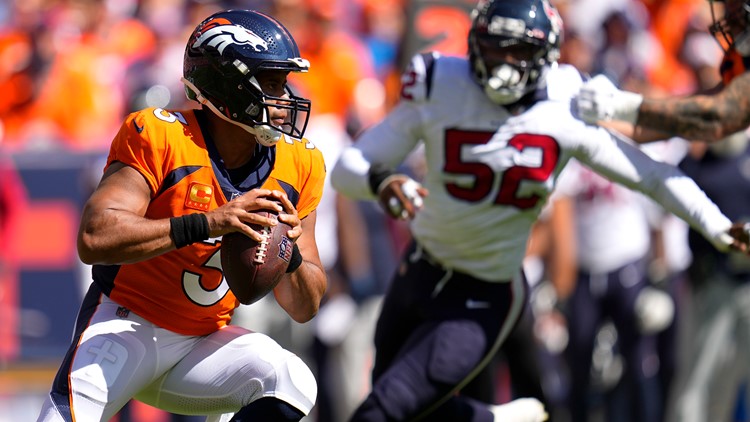 DENVER — The Denver Broncos have opened the 2022 season as a goal-to-go disaster.

They now have five goal-to-go series halfway through their second game.

The result has been zero touchdowns.

A sold-out crowd with only 3,108 no-shows gathered to witness the home debut for new Broncos star quarterback Russell Wilson.

He got off to a sluggish start. He was just 6 of 19 for 93 yards in the first half, then threw an interception that was bobbled off receiver Courtland Sutton’s hands to start the second half. The turnover helped the Texans move into their own failed goal-to-go situation, settling for a third Ka’imi Fairbairn field goal and a 9-6 lead.

Wilson did draw three pass interference penalties and a defensive holding infraction against the Texans’ secondary in the first half. Still, the Broncos’ offense through its first 1 ½ games has managed just 22 points.

To date, the Broncos’ season has been about their goal-to-go slump. After failing three times in those opportunities Monday at Seattle, the Broncos had first-and-goal at the 2 thanks to a 42-yard pass interference penalty receiver Courtland Sutton drew on Houston rookie cornerback Derek Stingley Jr.

It appeared the Broncos had a touchdown on a fade pass from Wilson to Sutton but replay showed the receiver had a foot outside the boundary. Two more Wilson incompletions brought fourth down and Brandon McManus out for a 20-yard field goal.

He made it but the home crowd booed the offense’s failure to score a touchdown.

It was 3-3 after the first quarter with Wilson only 2 of 9 for 32 yards. It didn’t help that No. 2 receiver Jerry Jeudy left the game early with a shoulder injury. Jeudy had four catches for 102 yards and a touchdown in the opener.

Houston quarterback Davis Mills did enough to drive into Broncos’ territory for a second Ka’imi Fairbarn field goal and 6-3 lead midway through the second quarter.

But for the most part, the Denver defense kept the home team in it while Wilson and the offense sputtered. At the 2-minute warning, Wilson was just 4 of 15 for 48 yards.

It was a struggle as with pass catchers KJ Hamler, Tim Patrick, Greg Dulcich and Jeudy down with injuries, Wilson’s targets were reduced to Sutton or bust – with the occasional dump pass to running back Javonte Williams.

But on the other side of the 2-minute warning, Wilson went to Sutton downfield again, who again beat Stingley for a 34-yard completion. Another 11-yard completion to Sutton on a crossing route set up first-and-goal at the 5.

Through their first five goal-to-go situations of the season, the Broncos had:

Addressed by 9NEWS prior to the game, Justin Simmons said he suffered his quad injury in the first half of the Broncos’ game Monday night at Seattle and played the rest of the game in pain. The injury occurred from a block by Seattle receiver Tyler Lockett.

Simmons thought the discomfort was a strain and didn’t miss a snap from his safety position – even making tackles on two of the final three plays – but the following day MRI exam revealed enough of an injury for the team to place him on short-term injured reserve (IR) where he hopes to only miss the minimum four games.

Broncos’ second-round draft pick Nik Bonitto was a healthy scratch from the game against the Texans. The rookie outside linebacker was dressed but didn’t get a special teams or defensive snap last week in the Broncos’ season opener at Seattle.

This may be a good time for a reminder that Elvis Dumervil was a healthy scratch the first three games of his career as a fourth-round rookie in 2006. Dumervil finished that year with 8.5 sacks and 105.0 in his 11-season playing career.

Shaq Barrett spent his entire 2014 rookie season on the Broncos’ practice squad and wound up leading the NFL in sacks in 2019 with 19.5 for Tampa Bay.

The point is, it’s way too early to call Bonitto a disappointment. Sometimes, it just takes edge rushing outside linebacker a bit of time to develop. Based on his play in training camp and the preseason, Bonitto needs to get stronger at the point of attack and on special teams – factors that explain why second-year outside linebacker Jonathon Cooper has been playing ahead of him.

RELATED: Jeudy off to fine start in meeting first-round expectations

> Top stories curated daily just for you! Sign up for the 9NEWSLETTER to get can’t-miss stories, Next and Broncos content, weather and more delivered right to your inbox.