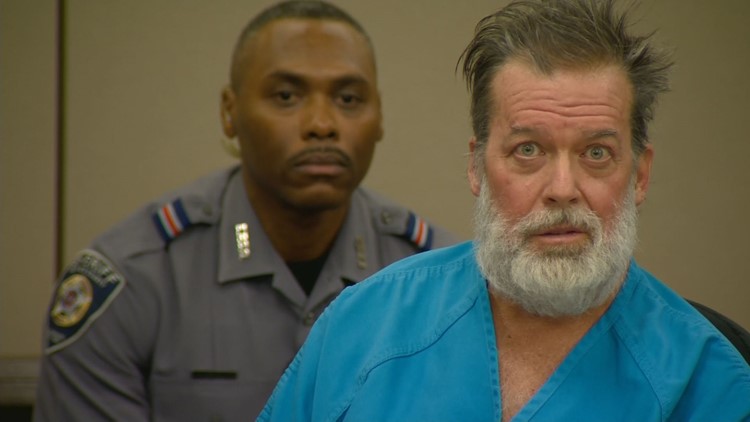 Robert Dear’s prosecution for the 2015 attack at a Colorado Planned Parenthood clinic has stalled because he has been repeatedly declared mentally incompetent.

COLORADO, USA — A mentally ill man charged with killing three people at a Colorado Planned Parenthood clinic in 2015 because it offered abortion services can be forcibly medicated to try to make him competent to stand trial, a federal judge ruled Monday.

The prosecution of Robert Dear, 64, has stalled because he has been repeatedly found mentally incompetent since his arrest and he has refused to take anti-psychotic medication for delusional disorder.

During a three-day hearing this summer, prosecutors argued that medication had a substantial likelihood, based on research and the experience of government experts, to make Dear well enough to meet the legal standard for mental competency — being able to understand proceedings and assist in his defense.

Dear’s lawyers and experts, however, said the government’s plan did not take into account Dear’s age and his health problems, including untreated high blood pressure and high cholesterol, which could be worsened as a result of the medication’s side effects.

Dear, who has called himself a “warrior for the babies,” intended to wage “war” against the clinic because it offered abortion services, arming himself with four semi-automatic rifles, five handguns, two other rifles, a shotgun, propane tanks and 500 rounds of ammunition, prosecutors have alleged. He began shooting outside the clinic before getting inside by shooting his way through a door, according to his federal indictment.

According to experts who testified and Dear’s lawyers, Dear has persecutory delusions that cause him to believe that the FBI is following him because he called a radio show in 1993 to criticize the agency over the law enforcement siege against the Branch Davidian compound in Waco, Texas. He also believes his lawyers are working for the FBI and the judge is also in on the arrangement.

Dear mentioned the radio call in one of many outbursts during the recent hearing, where he also claimed the shooting was a “success” and told the judge to go to hell because he did not get to testify. He largely remained quiet after Blackburn warned him that he would not tolerate any more disturbances. The judge said he concluded the outbursts were not the result of Dear’s mental illness but of “selfish, childish and disaffected arrogance.”

After Dear’s prosecution bogged down in state court over the competency issue, Dear was charged in federal court in 2019 under the 1994 Freedom of Access to Clinic Entrances Act. Federal prosecutors have said they would not seek the death penalty against him if he is convicted, but life in prison instead.

Two of the people killed in the attack were accompanying friends to the clinic — Ke’Arre Stewart, 29, an Army veteran who served in Iraq and was a father of two, and Jennifer Markovsky, 36, a mother of two who grew up in Oahu, Hawaii. The third person killed was a campus police officer at a nearby college, Garrett Swasey, who responded to the clinic after hearing there was an active shooter.