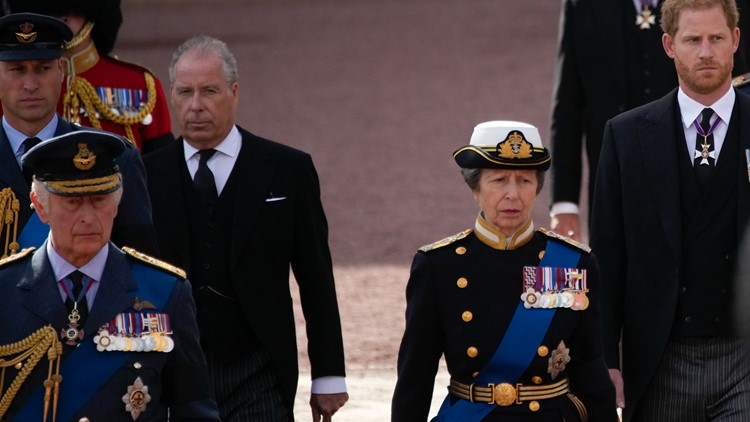 Some members of the royal family will wear military uniforms despite not serving in the military. Others who have served won’t be allowed to wear the uniform.

WASHINGTON — During the funeral services for Queen Elizabeth II Monday, several members of the royal family will don formal military uniforms to pay their respects.

Members of the royal family who are granted titles and duties on behalf of the crown are permitted to wear their military uniforms during ceremonial events, such as state funerals.

For some who served in the military, such as newly coronated King Charles III, the uniform is a traditional choice.

But other family members will still wear military uniforms and medals despite never having served, or despite having been stripped of military titles. Here’s why.

The king has worn his formal military garb to many of the events remembering his mother, and will wear the full regalia to her wake and funeral.

In the Air Force, Charles was trained as a jet pilot. He gave up flying after a crash landing in 1994, for which the crew of the aircraft was found to be negligent by an internal review.

In the Navy, Charles served on a missile destroyer and several frigates before taking command of a coastal minehunter in 1976, less than a year before leaving the military.

As king, Charles is able to bestow and remove privileges to other royals, including the right to wear military uniforms.

Princess Anne was seen at events throughout the week leading up to the funeral in a Royal Navy ceremonial uniform.

She has never served in the Royal Navy, nor any other branch of the British armed forces. But like many royals, she holds a number of honorary military titles.

Anne was made a Rear Admiral in 1993 and was promoted to Vice Admiral in 2009 before becoming an Admiral in 2012. So, although symbolic, she does hold a rank in the UK’s Navy.

She is also a General in the British Army and an Air Chief Marshal in the Royal Air Force, and has a number of other titles across the British Commonwealth.

The Duke of York is perhaps the most controversial member of the Royal Family to put on a uniform for his mother’s services.

Earlier this year, he was stripped of his military patronages and titles by the queen after being accused of sexual assault by Virginia Giuggre, who also accused Jeffrey Epstein. Andrew’s association with Epstein, a sex trafficker reportedly providing services to the wealthy and powerful, caused an outrage when it came to light.

He denied Giuffre’s sexual assault claim in the U.S., but settled out of court for an undisclosed sum.

Andrew served in the Royal Navy as a helicopter pilot and instructor and as the captain of a warship.

Despite having his military titles revoked and no longer being a “working royal,” his brother, King Charles, has given him permission to wear the uniform during the queen’s vigil, although he will wear civilian clothes to the funeral itself.

Similar to Anne, Edward has also been spotted in a military uniform to several of the events honoring his mother in the week leading up to her funeral despite never having served.

In 1986, Edward joined the Royal Marines after leaving university, but dropped out of the program four months later. Despite this, he still holds a number of military honors, including the title of Commodore-in-Chief of the Royal Fleet Auxiliary.

He is also a Royal Honorary Colonel of the London Regiment, Royal Colonel of 2nd Battalion, The Rifles, and an Honorary Air Commodore of Royal Air Force Waddington.

Many in the UK criticized his numerous medals on display because he dropped out of the 12-month basic training program.

Harry and his wife, Megan Markle, stepped down as senior members of the royal family in 2020 and moved to Southern California. Because he renounced his role as a working royal under the crown, Harry subsequently lost all of his military titles and the right to wear a military uniform to any services honoring the queen.

Quickly after news of the queen’s death, Buckingham Palace confirmed that the Duke of Sussex would not be allowed to wear a military uniform, despite being one of the only living members of the royal family to have seen active duty.

At the time, it was also announced that Prince Andrew would be allowed, even though he too had no royal military titles.

But by Thursday before the funeral, palace officials appeared to have changed their minds.

According to reports from British media outlets, Harry will be allowed to wear his military uniform to at a final vigil. On Saturday evening, Harry will reportedly join seven other grandchildren, including his brother Prince Williams, to stand in silence for 15 minutes by the queen’s coffin.

However, similarly to Andrew, he will not be allowed to wear one to the funeral itself, because military attire then is reserved for working members of the royal family.