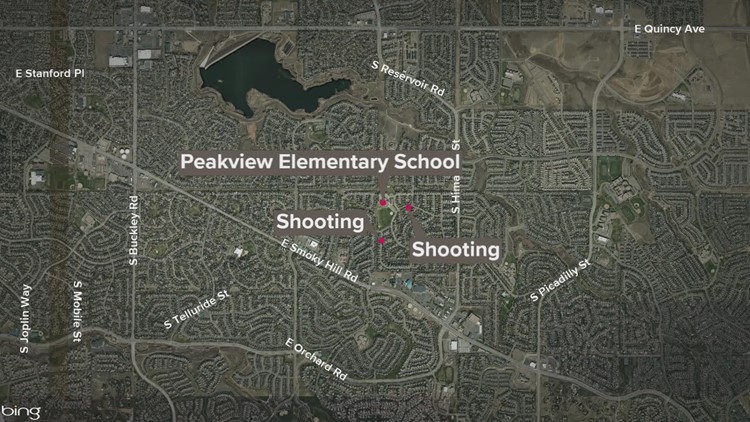 Three homes were struck by gunfire in Centennial Sunday night, according to the Arapahoe County Sheriff’s Office.

CENTENNIAL, Colo. — Gunshots were fired into multiple homes in Centennial over the weekend, and in one instance the gunfire narrowly missed a 7-year-old boy who was sitting in a chair playing a video game.

Around 8:30 p.m. Sept. 18 investigators with the Arapahoe County Sheriff’s Office were notified about gunshots fired in the area near East Progress Circle and South Flanders Court in Centennial. That’s in an area south of Quincy Reservoir, near Smoky Hill Road and South Himalaya Street.

One person reported to 911 dispatchers that they heard five shots being fired before they heard a vehicle take off at a high rate of speed while firing five additional shots. Bullets struck at least three homes, according to the Sheriff’s Office.

A resident who lives in the 5200 block of South Flanders Street said his home was struck by a bullet that went through the living room window. The bullet passed through another wall, through a box of toys, and through the armrest of a chair where a 7-year-old boy was playing on his computer.

The boy was leaning forward in the chair to play the video game, which resulted in the bullet missing him by a few inches, the Sheriff’s Office said.

Another home in the 5200 block of South Flanders Street was struck when a bullet went through the master bathroom window into the shower.

A few blocks away, a home in the 5300 block of South Dunkirk Way was struck by gunfire. In that case, the bullet went through the back wall of the house and into the kitchen, hitting a microwave.

Deputies located multiple shell casings in the area. No one was injured.

Investigators believed two vehicles were involved. They were described as a black Mustang or Dodge with a loud exhaust and a black BMW 4-door sedan.

Residents who live in the area were asked to check their doorbell or surveillance cameras for any vehicles in the area around 8:30 p.m. Sept. 18.

Anyone with information should contact the Sheriff’s Office tip line at 720-874-8477.