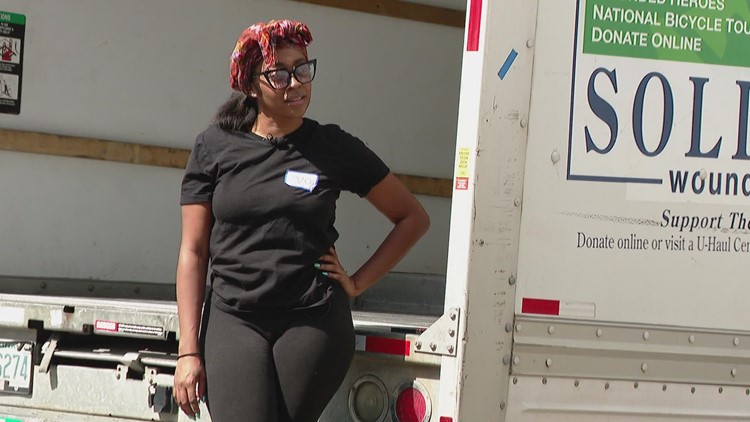 Residents have three-hour time slots starting Monday to move out of Parkside Collective apartments after an explosion – the future is uncertain for many people.

AURORA, Colo. — Dozens of people living in an apartment complex damaged in an explosion on Sept. 10 began moving out Monday morning.

Moving day was made worse for many because it was unexpected.

Evaristo said she lived at the Parkside Collective apartments on East Alameda Avenue with her four children. They’ve been staying in various hotel rooms since they evacuated nine days ago.

Aurora Fire investigators are still looking into the cause of the explosion that closed the building and sent people packing.

Last week, the property management told residents it would take several months to “evaluate the building” and residents would need to relocate.

“I’m frustrated,” said resident Tierra Wilder. “I’m irritated because I feel like they’re not doing enough to accommodate us.”

Wilder said the complex set her up temporarily in a hotel, returned her security deposit and gave her $1,000 to help with moving expenses. She packed up her belongings over the weekend and was given a three-hour window Monday morning to move.

“Usually, you can sort things by kitchen, bedroom, but I threw stuff in so many boxes,” Wilder said. “It’s going to be a long process to unpack and stuff because I don’t know where half my stuff is.”

At least Wilder was able to move with all of her possessions. Aurora Police said the department received at least 30 reports of burglary from units at Parkside Collective since the explosion.

Wilder said she and her four children plan to move into another property in the metro area owned by the same management company.

Evaristo said she doesn’t feel comfortable moving into another apartment complex after the explosion.

“I’ve exhausted all my means here in doing and going through this situation, and I am looking to RV life, living in an RV,” she said.