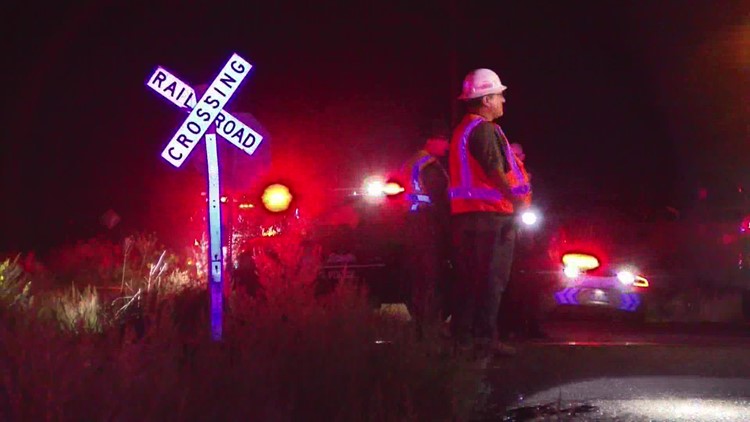 As Yareni Rios-Gonzalez of Greeley recovers with numerous broken bones, 9NEWS has learned the train crossing where she was hit has a history of fatal collisions.

PLATTEVILLE, Colo. — As state investigators piece together how a woman placed in a police cruiser was hit by a train after an officer parked the cruiser on the tracks, 9NEWS has learned more about the woman and the fatal history of the train crossing.

“She was frantically trying to get out,” personal injury attorney Paul Wilkinson told 9NEWS. “Of course, the doors were locked.”

Wilkinson said his client, Yareni Rios-Gonzalez, 20, is conscious and able to talk after Friday’s incident in which a Platteville Police Department officer pulled her over on suspicion of road rage with a gun.

The Platteville officer parked his car on the tracks during the stop near US Highway 85 and County Road 38. Shortly after Rios-Gonzalez was placed in the cruiser, the train hit it.

Rios-Gonzalez, who works as a TSA agent, suffered nine broken ribs, a fractured sternum, a broken arm and numerous other injuries to her head, back and legs, her attorney said.

“She’s definitely upset about what happened. She doesn’t understand why she was left in the car. She was yelling to get their attention and could see the train coming,” Wilkinson said.

9NEWS has learned the Fort Lupton Police Department has submitted a felony summons against the suspect to the Weld County District Attorney for review.

“Our intake attorney will be looking at it to determine if charges will be filed,” an office administrator for the district attorney said over email.

Earlier this week, the Weld County District Attorney’s Office also indicated to 9NEWS it would review potential charges against police in the case.

“The officers can clearly be charged. This was absolutely reckless behavior,” Robinson said. “It’s really inconceivable that in this day and age, any adult would park on railroad tracks. If that isn’t the essence of reckless behavior, I don’t know what is.”

9NEWS pulled federal rail records showing four prior train collisions at the crossing, with a total of four fatalities since 1994.

As recently as 2019, two men were killed after a train struck a semi.

The crossing doesn’t have lights, signals or gates that initiate when a train approaches.

Keith Millhouse, a rail safety consultant who spent 12 years serving as a board member for the Southern California Regional Rail Authority, said the collision was entirely preventable.

“Never park a car on a set of train tracks for any amount of time, even if you think it’s abandoned,” Millhouse said. “It’s just mind-boggling that this could occur.”

Millhouse also said it may be time for authorities to review the crossing for potential safety enhancements.

“So I think this one probably needs to be revisited. Although clearly, in the case of the latest accident, this was something that was entirely preventable and should have never occurred,” Millhouse said.

9NEWS has reached out to Platteville Chief of Police Carl Dwyer for comment, but he has not responded.

If you know any information about this story or would like to send a news tip, you can contact jeremy@9news.com.