I, like many of you, live in a tech bubble from which there is no coming back. People in this bubble surround themselves with a lot of gadgets, subscribe to services they hardly use, and post every life event as an update on social media. And it is perhaps to break this bubble that the new Nokia 2660 Flip exists. For me though, using the Nokia 2660 Flip was more to do with my love for old-school flip phones than giving up my iPhone for a ‘basic’ phone. That approach clearly worked and I was able to co-opt this feature phone too into my little tech bubble.

The hippy in me wanted a ‘real’ flip phone

My love for flip phones isn’t new. In the 2000s, Motorola Razr was a rage before the iPhone was even launched. I could not afford the Razr but I did end up buying a Sony Ericsson flip phone when I went to college. As smartphones gained in popularity, flip phones started to lose popularity and eventually were phased out – except in Japan where they are still popular. The hipster in me wanted a flip phone – a real one that snaps shut with a satisfying sound and not a clamshell-style foldable phone. I did try searching for it on Amazon and realised nobody makes a flip phone anymore. I then contacted a seller on OLX and tried to get a Moto Razr but battery issues made me drop the plan of getting a second-hand phone. This is where the Nokia 2660 Flip comes in.

I have been using the Nokia 2660 Flip for well over a week, and oooh, is it pretty. (Image credit: Anuj Bhatia/Indian Express)

There is a certain nostalgia when you use the Nokia 2660 Flip. I just wonder how a teenager who was born in the late 2000s would feel about using a Nokia flip phone in 2022. Even those who have used vintage-style clamshell phones while growing up will feel awkward using a flip phone daily.

This bright red phone is what you want to trigger some fun. It is hard to miss. “Is that a flip phone?” a fellow passenger politely asked on a plane. Another kept gazing though not finding the confidence to convert the curiosity into conversation.

There is no fancy, durable aluminium chassis or glass black here. The polycarbonate body does not look or feel cheap. The phone has rounded corners and a chubby appearance, almost like a toy. The Nokia 2660 Flip wows you by just how small and light it is. I had no problem slipping it into my jeans pocket. I wish I could say this about modern smartphones. The flip mechanism feels sturdy and reliable. There is a sharp click when folding which I loved. You will never get that sense of satisfaction with a modern smartphone that doesn’t fold in half unless you pay thousands for a Samsung Galaxy Z Flip 4.

If you are used to a classic Nokia phone, you feel at home with the Nokia 2660 Flip. The device’s back is removable and reveals slots for two SIM cards, a MicroSD slot, and a removable 1500mAh battery. The phone supports a headphone jack and Bluetooth for connecting to your wireless headphones. A micro-USB 2.0 port is there on the extreme left of the phone. The power button is to the right side and is nice and clicky. The volume rocker remains on the right. Once you are used to opening and closing a Nokia 2600 Flip, it’s time to learn about the screens. This phone has two of them, an external screen and a display inside. You will get a 1.7-inch external display that’s meant for viewing essentials such as the time, alerts and notifications. I found the secondary display handy because you can check notifications and time without opening the phone.

A 0.3-megapixel camera with a flash is placed right above the external display of the front panel. I have nothing much to say about the camera; it’s really bad for 2022. The main screen is tiny at 2.8-inches compared to today’s smartphones, but big enough to read texts, check the calendar or play pre-loaded games. A feature the elderly may want to use is a zoomed-in user interface which makes reading what’s on screen easy. When you are done, simply flip it closed to hang up calls. Before I started using the Nokia 2660 Flip, I knew why I wanted to use this device. There is no touchscreen, support for apps like WhatsApp is missing, and you won’t be able to play games that even a basic smartphone can handle. The operating system is simple and reminiscent of other Nokia feature phones. Apps such as Facebook, Snake and a few other games come preloaded on the device. I am not even telling you the specs of this device – because that is inconsequential to the experience you get with a device like this.

The first thing to understand; it is not intended to replace my iPhone or a smartphone you already own. I always wanted a secondary phone for emergencies. There were times when my phone was out of coverage or battery for hours, like when I was on a long train journey recently. Having a secondary phone, long battery life comes in handy when you are travelling. The battery on the Nokia 2660 Flip lasts for days, and that solves my purpose of investing in a secondary phone. This is, despite the fact that typing on a T9 keyboard is frustrating and there is no WhatsApp, my primary mode of communication these days. But at least I can call or text someone in case of an emergency.

I do take the Nokia 2660 Flip with me when I go for a morning walk but not every day. It depends on my mood – it can’t be my primary phone. If I feel like disconnecting from the outside world for some time and want a break from the news cycle and WhatsApp notifications, I use the Nokia 2660 Flip. I recently left my iPhone home and went to a park in the morning with my Kindle and Nokia 2660 Flip. I didn’t get distracted and enjoyed reading a book after a long time. 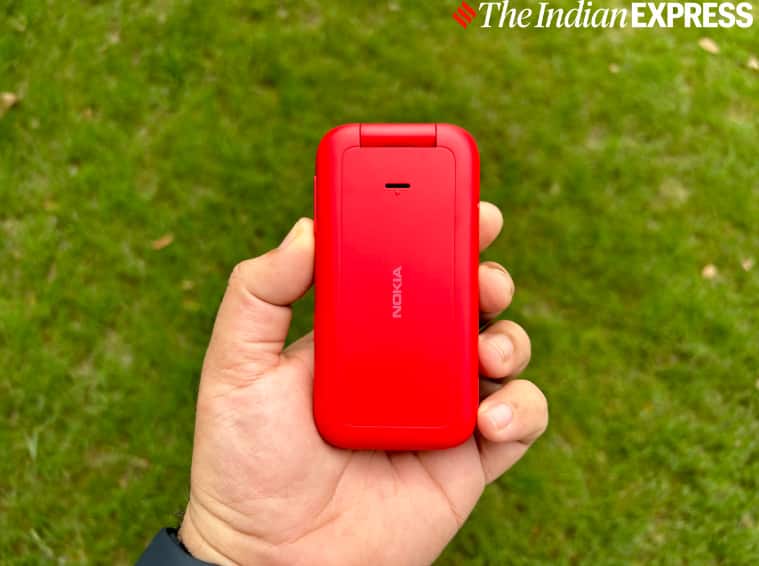 Just think about it: why would someone who is already so accustomed to a smartphone switch to a Nokia 2660 Flip in 2022? Maybe the person who wants to buy this phone has a fondness for classic phones of the past and is keen to add the Nokia 2660 Flip to the collection. I feel a lot of users who long for simpler times and want to keep their smartphones down are likely to turn to the Nokia 2660 Flip. The elderly might be another target audience for this type of phone which is simple to operate and lasts long. There is also an emerging section of users that are turning vintage tech into a fashion statement. Vintage tech nostalgia is real and it’s already a big trend on TikTok. If there is one type of user who won’t buy this phone, it is the budget feature phone customer. The price will ensure this is not on their radar.

Not everybody would be open to the idea of spending Rs 4,699 on a feature phone. I never intended to make the Nokia 2660 Flip my primary device; the intention was always to use it alongside the iPhone. I still struggle to reduce my dependency on a smartphone and putting down the phone isn’t always an option when you are in the news business. I can’t think of a smartphone-less world but I do feel there is a need to have a digital detox whenever it is possible. Maybe the Nokia 2660 Flip helps in having a healthier relationship with tech.