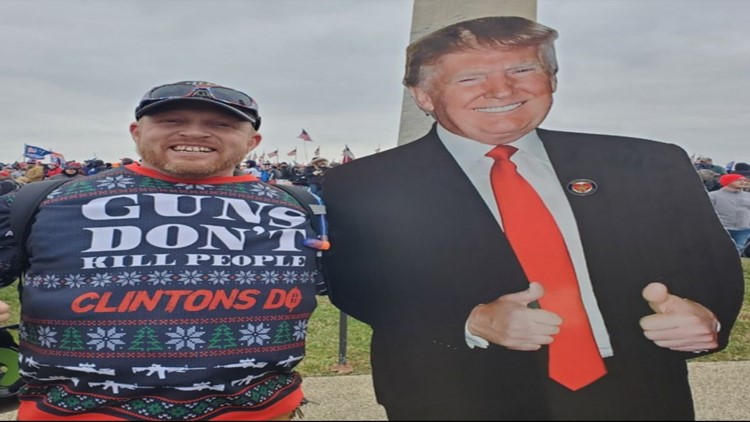 Thomas Patrick Hamner, 49, of Peyton, was sentenced on one count he pleaded guilty to and is awaiting court proceedings on five more charges.

WASHINGTON, D.C., USA — A Colorado man who was accused of assaulting police officers during the Jan. 6 Capitol riot was sentenced Friday to 30 months in prison on a felony charge, according to the U.S. Attorney’s Office.

Thomas Patrick Hamner, 49, of Peyton, was sentenced in Washington, D.C., on a charge of interfering with law enforcement officers during a civil disorder. He pleaded guilty to the charge in May.

> The video above on Thomas Hamner’s arrest aired last November.

He pleaded not guilty to five other charges and was awaiting court proceedings on those, according to a news release. Hamner was arrested in November in Colorado Springs on multiple charges, including the following, according to the FBI:

According to court documents, video footage shows Hamner fighting with officers from U.S. Capitol Police and the Metropolitan Police Department at one of multiple bike rack barrier lines that were formed by officers, according to the FBI.

The FBI said Hamner was also seen around 1:40 p.m. joining other rioters in pushing a large metal sign into a defensive line formed by officers, according to court documents.

Stills of the videos, taken from court documents, can be seen below:

After his prison term, Hamner will be placed on three years’ supervised release. He must also pay $2,000 in restitution.

Hamner was the 11th Coloradan arrested in connection to the Jan. 6 insurrection. The FBI said more than 870 individuals have been arrested nationwide, including more that 265 charged with assaulting or impeding law enforcement officers.

RELATED: Jan. 6 takeaways: Trump ‘could not be moved’ amid violence