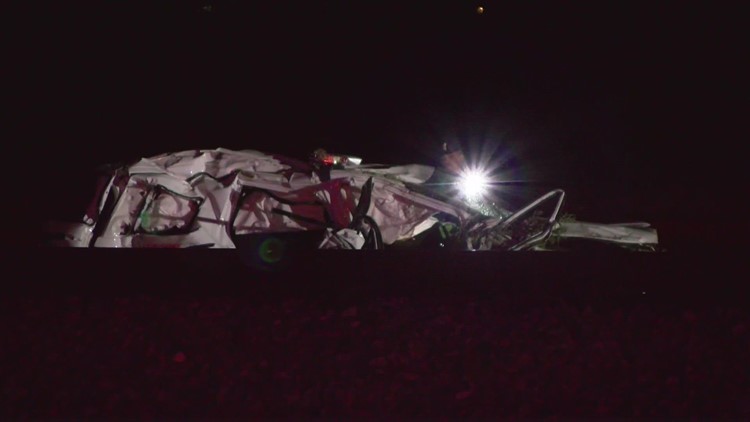 9NEWS has obtained police body camera footage and dashboard camera video showing when a train collided with a Platteville Police cruiser that had a suspect inside.

FORT LUPTON, Colo. — The Fort Lupton Police Department on Friday released some video showing the moments surrounding the crash where a patrol car that was parked on train tracks with a detained woman inside was struck by a train.

The video is eight minutes long and contains edited portions of clips released by the Fort Lupton Police Department after 9NEWS filed a records request. The full clip that was provided can be viewed below in its entirety.

Yareni Rios-Gonzalez suffered numerous broken bones when the patrol car belonging to Platteville Police was hit by the train on Sept. 16 near Highway 85 and County Road 38. The video released Friday shows she was in the car for about two minutes before the car was hit.

Video also shows two officers looking through her truck as the train horn can be heard blaring. As it gets closer one of the officers realizes the patrol car is on the tracks and begins yelling.

> Content warning: Some viewers may find the video disturbing.

Some of the video released shows the moments when police pulled over Rios-Gonzales who was a suspect in an earlier road rage call and placed her in the police patrol car on the tracks.

In that portion of the video, Rios-Gonzales appears to comply with officers’ requests and respectfully answers their questions.

The released video also shows officers searching her vehicle. At one point it’s noted that a “round” is found near the driver’s side door and a gun holster was found in the vehicle. Just before the video provided to 9NEWS ends, an officer searching the vehicle is heard saying, “there’s your gun.”

The Colorado Bureau of Investigation(CBI) said an officer with the Platteville Police Department found the vehicle and stopped it near U.S. 85 and County Road 38. Rios-Gonzalez stopped just beyond the railroad tracks, and the patrol officer stopped behind it on the tracks.

Two Fort Lupton officers arrived, CBI said, and the officers conducted a high-risk traffic stop. They detained Rios-Gonzalez on suspicion of felony menacing and put her in the back of the Platteville Police car, according to CBI.

RELATED: Train crossing where woman in police cruiser was hit has fatal history

The Platteville officer was placed on paid leave during the investigation.

>The video below is the entire 8-minute clip that was provided to 9NEWS by the Fort Lupton Police Department. Police have indicated there are nine videos totaling 21 hours of footage their officers recorded on police body camera and dashboard camera video.

If you have any information about this story or would like to send a news tip, you can contact jeremy@9news.com.