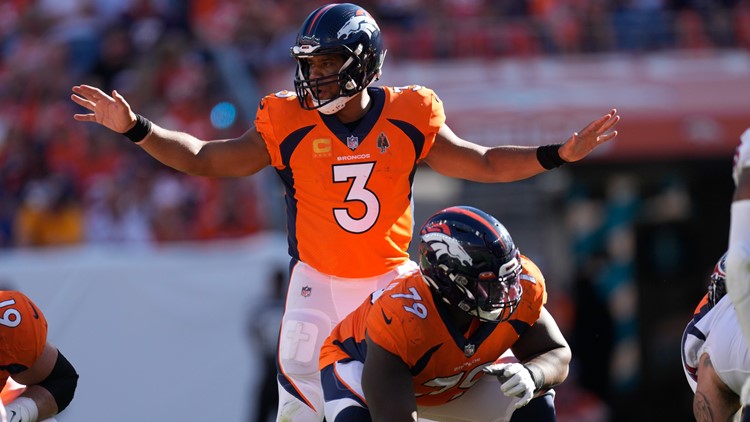 Let Russ run is point 1. Oh, and better game management would help, too.

ENGLEWOOD, Colo. — In a highly unusual development, the Denver Broncos went from 2.5-point home favorites for the game Sunday night against the San Francisco 49ers to 1.5-point underdogs.

There were three factors to this overnight swing: 1. Jimmy Garoppolo played well off the bench in relief of Trey Lance, who suffered a season-ending injury. 2. Back-to-back game management struggles for Broncos newcomer head coach Nathaniel Hackett. 3. Mounting early injuries to the Broncos’ roster.

The third point was overrated. It appears Broncos standout cornerback Pat Surtain II (shoulder) and receiver Jerry Jeudy (ribs, shoulder) are tracking toward playing Sunday night. Also, inside linebacker Josey Jewell will return from his calf injury to make his 2022 season debut and it also appears receiver KJ Hamler is tracking to play.

The Broncos have a chance to be healthier for game 3 than they were in their first two games.

As for the first two points, and three more keys, here’s how the Broncos can defeat the 49ers before a primetime audience.

So far, the Broncos version of Russell Wilson is missing one notable characteristic – his ability to create with his legs. Wilson is a dual-threat quarterback. So far with the Broncos, he has only been a passer. He averaged 479 rushing yards and 5.5 rushing touchdowns per season through the first 10 seasons of his career, all with Seattle. In two games with the Broncos, Wilson has just 5 yards on 3 carries and the Broncos are 0 for 5 in goal-to-go situations.

If Wilson can run, it will open up those tweener decisions cornerbacks have to make between moving up to stop the QB or stay back to cover the receiver.

2. Pressure and pick off Jimmy G.

49ers quarterback Jimmy Garoppolo is a solid, above-average quarterback. But he can make some brain-lock mistakes. It will be imperative for the likes of Bradley Chubb, Randy Gregory, Dre’Mont Jones and the Ejiro Evero blitzes to apply pressure on Garoppolo. Two interceptions created by pressure is how the Broncos win this game.

Yes, it starts with Hackett. But his coordinators need to help, too. Hackett shouldn’t have to be the one who makes sure his punt returner is on the field on fourth down. Better game-day communication can lead to better decision making.

The Denver D ranks 4th against the run (78.0 yards per game) but their two opposing lead backs, Rashaad Penny and Dameon Pierce, combined for 129 yards on 27 carries (4.8 yards per). Kyle Shanahan’s 49ers and Kevin Stefanski’s Browns have the NFL’s two best pure running games. Jeff Wilson has been a veteran backup tailback but he rushed for 84 yards on 18 carries last week against Seattle, and Deebo Samuel is the best rushing receiver in football.

The 49ers tight end has played one game against the Broncos. It was late in the 2018 season and Kittle caught 7 passes for 210 yards. In the first half. Considering the Denver D has often struggled against tight ends – see the season-opener at Seattle, and see the Chiefs’ Travis Kelce (15 games, 90 catches, 1,176 yards vs. Broncos) – Kittle’s return to the 49ers lineup should sound alarms.

RELATED: Advantage, Denver: The Broncos have D.J. Jones and the 49ers don’t