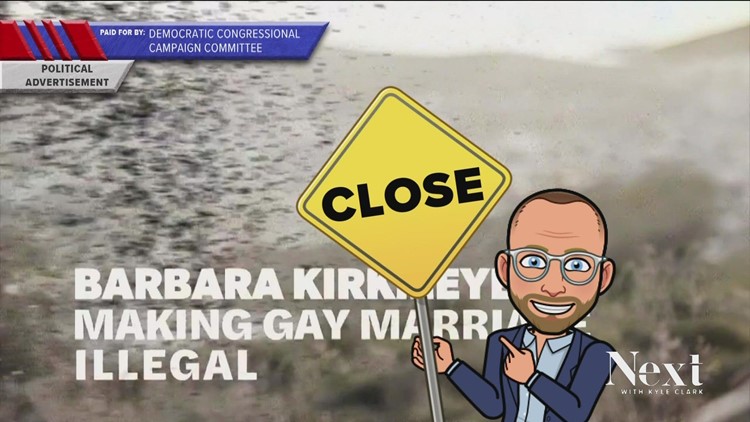 Leading up to the Nov. 8 Election, we will Truth Test political ads to help you make an informed decision. For Colorado’s newest district, we’re looking at this one.

COLORADO, USA — Leading up to the Nov. 8 Election, we will Truth Test political ads to help you make an informed decision.

The 8th Congressional District is Colorado’s newest, the result of an increased population determined every 10 years by the census. An independent redistricting commission drew the boundaries of CD8 to include parts of Adams, Larimer and Weld Counties.

As of Sept. 1, the voter registration makeup of CD8 is:

Because it is a district that could swing to either party, national money from Washington, D.C. is being spent on political ads.

The Democratic Congressional Campaign Committee (DCCC) is the political arm of the Democrats in the House of Representatives.

DCCC is airing an attack ad against State Sen. Barbara Kirkmeyer, the Republican candidate for CD8, calling her “extreme.”

In July, Kirkmeyer appeared on Fox31 and was asked about same-sex marriage.

Previously, Kirkmeyer answered candidate questions for something called iVoterGuide, which is associated with American Family Association Action, whose mission is to advance Christian values.

She filled out those questionnaires in 2014, when she unsuccessfully ran for Congress in Congressional District 4, and in 2020, when she was elected to the State Senate.

In 2014, she chose “strongly agree” for the question: “Marriage is a union of one man and one woman. No government has the authority to alter this definition.”

In 2020, she chose “agree” for the question: “Governments should define marriage as between one man and one woman; no other definition of marriage should be legalized or supported with taxpayer or public funds.”

However, in an open-ended question on that 2020 questionnaire, which asked “Is there anything else you would like voters to know about you?” Kirkmeyer included, “I believe marriage should be defined by the Church not Government.”

AD CLAIM: “She denies the science of climate change and wants to eliminate protections that keep our air and water clean.”

VERDICT: On climate change, kind of. The answer is a little bit muddy about eliminating protections to keep air and water clean.

Just before the June 28 primary, The Colorado Sun interviewed all four Republicans running for CD8.

One question was, “Do you believe climate change is human caused and, if so, what should be done about it?”

Kirkmeyer was quoted as answering: “The climate is always changing, and the Earth has been gradually warming since the Little Ice Age. To what extent any warming is a result of man-caused activity is unknown. The United States has been reducing its emissions of carbon dioxide in recent years, but worldwide emissions continue to grow due to China, India and other emerging economies.”

The part about eliminating protections that keep our air and water clean, that claim is based on what Kirkmeyer said about the Environmental Protection Agency (EPA) at a CD8 Republican candidate forum in March, hosted by the Republican Women of Weld.

“The EPA, man, it just needs to go away,” Kirkmeyer said. “But the EPA has done an incredible job at killing oil and gas, both in water quality and air quality regulations. So again, Congresspeople pass laws, we need to pass laws to rein in the EPA.”

Having the EPA go away and reining the agency in are two competing thoughts. As Kirkmeyer mentioned, Congress passes laws, and the EPA implements those laws. If she were elected to Congress, Kirkmeyer could work on legislation that impacts what the EPA can and cannot pursue.

VERDICT: This was true. Kirkmeyer now supports one exception.

“I’m pro-life and I always have been,” Kirkmeyer told 9NEWS reporter Steve Staeger in August, while explaining why her candidate website scrubbed the section on abortion following her primary victory.

However, in that 2020 questionnaire, there was a question that asked “Under what circumstances should abortion be allowed?”

When she unsuccessfully ran for Congress in 2014, she was even more specific in a candidate forum on PBS12.

“I don’t agree to any exceptions to abortion,” Kirkmeyer said.

9NEWS reached out to Kirkmeyer’s spokesperson, Alan Philp, by email, asking what happened between 2020 and the present that she is now comfortable with an exception for abortion when the mother’s life is at risk.

Philp said that she has always supported that exception and that “such nuances get lost on oversimplified candidate surveys.”

That just does not pass the smell test.

Those surveys included open-ended sections where Kirkmeyer took advantage of writing her own words. And her answer in the candidate forum from 2014 left no doubt.

RELATED: Truth testing an anti-Caraveo ad for the CD8 election