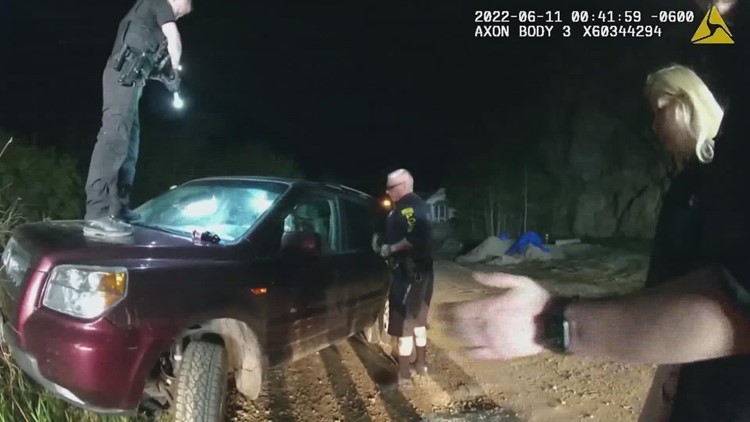 CLEAR CREEK COUNTY, Colo. — A crisis response team is coming to Clear Creek County, but its development is long overdue.

It was in June that a Clear Creek deputy shot and killed 22-year-old Christian Glass, who had gotten his car stuck on a road in Silver Plume.

In his 911 call and 70 minutes of bodycam footage, Glass appeared to be experiencing a mental health crisis. After officers tried unsuccessfully to get a terrified Glass to come out of his car, they proceeded to smash his window, shoot him with bean bags, use a Taser on him, and then fire six shots through the windshield, which killed him. Glass was holding a knife in his hand when was shot.

In a press release, the sheriff’s office said Glass’ death “has been a tragedy for everyone,” and that they must remain impartial in the investigation, which has been handed over to the Colorado Bureau of Investigation (CBI) and the District Attorney.

However, this decision comes two years after a Grand Jury originally recommended more mental health resources in the county following a different police shooting in 2020. Clear Creek ignored those recommendations.

Two Clear Creek deputies shot and killed Darrin Patterson in May 2020. This shooting was deemed justified by the Grand Jury, but it expressed concern over the failure of police to take action when Patterson had exhibited signs of mental illness before. Patterson had reached out to the Idaho Springs Police expressing paranoia, like Glass had on his 911 call.

The Grand Jury recognizes there exists insufficient resources and facilities available to address individuals who suffer from various types of mental illness in the Clear Creek County community…Mental health resources should be made more available in the community including, funding by Clear Creek County and the municipalities within the County, to address the mental health issues which afflict community members.

The Grand Jury encourages the municipalities and County to address these issues, enabling law enforcement officers with resources that do not currently exist, in hopes of preventing another tragedy like this from occurring. In the near term, the Grand Jury recommends to local governments in Clear Creek County, that they identify mental health resources, whether in or outside the county, that can immediately be made available to law enforcement to assist those individuals in mental health crisis.

The county commissioners and the sheriff talked about that recommendation at a meeting back in 2020.

“What’s significant about the number of law enforcement contacts that he [Patterson] had had with Idaho Springs was that he had never been given any kind of direction, such as a mental health referral,” former 5th Judicial District Attorney Bruce Brown said.  “And that’s concerning, because any trained officer and all the officers involved with him could recognize his mental health.”

He went on to say that he thought the actions of the police department “made it somewhat worse,” by not directing Patterson to mental health resources in the time leading up to the shooting.

Brown talked about models of crisis response teams in Summit and Eagle counties, saying the trend is to get on-the-ground referrals and assistance to those who need it.

At the time, Sheriff Albers shot down the idea of special responders for mental health calls, denying Clear Creek’s need for a crisis response team.

“I can see where that would work, maybe in a bigger city where they have more calls,” Albers said. “I don’t think there’s a supply and demand enough to have a 24/7 crisis intervention team at this point in Clear Creek County. They’d be doing a lot of sitting around.”

Now, after drawing international attention, he seems to have changed his tune.

“We’ve been talking about this for a long time. We need to get action done,” he said in a county board meeting on Tuesday.

Attorneys for the Glass family see these actions as too little, too late.

“Had a Crisis Response Team been in place in June of 2022, Christian would be alive today,” they wrote. “The time for ‘research and development’ has passed and the nation must demand action and justice for Christian Glass.”