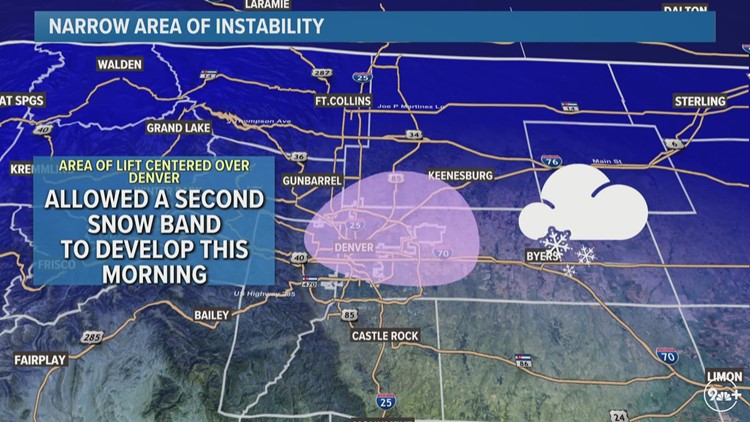 A small area of lift and an ideal wind direction gave Denver an unexpected boom of snow on Monday night.

DENVER — Most of the Denver area probably wasn’t expecting to wake up to as much as five inches of snow on Tuesday morning. And while the forecast did include snow, there’s little doubt that most areas saw more snow than expected.

In order to get any form of precipitation, lift is needed. Rising air condenses into moisture.

On Monday night and Tuesday morning, we had two extra areas of lift, and both were somewhat unexpected.

The first (and main) factor that helped boost snow totals was a small area of extra lift that was centered over the central and northern parts of the Denver metro area.

That area of lift, due mostly to a cold front that stalled out and moisture that pushed in from the east, helped create a second snow band that moved through the area early on Tuesday morning.

The other factor was a favorable wind direction for Denver snow. Most of Denver’s snow comes from upslope flow, which is when winds back against the Rockies, forcing the air to rapidly rise and condense into moisture.

For Denver, a north-northeast wind allows the city to tap into moisture from the east without it getting ‘robbed’ by adjacent ranges like the Palmer Divide and the Cheyenne Ridge.

Heading into last night’s snow, computer models hinted at more of a due northerly wind, which is more of a dry and cold wind for the Denver area. But the added easterly component to the wind tapped into more moisture than expected, leading to higher snowfall totals.

More snow could fall later this week, and it’ll be a tricky forecast. On Thursday, a weak system will usher in some Arctic air, but the jet stream will be overhead. That’ll lead to the potential for some localized bands of heavier snow, though most of the Denver area will probably see between 1-3 inches of accumulation by Friday morning.

RELATED: Colorado snow totals: Here’s how much fell around the state