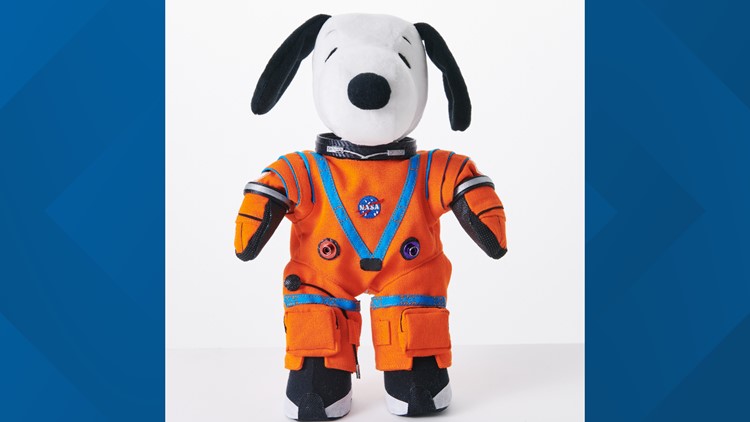 A plush Snoopy toy has a big job for the historic launch.

CAPE CANAVERAL, Fla. — One small step for man, one giant leap for Snoopy.

The beloved cartoon beagle is aboard for NASA’s Artemis I mission, which finally launched early Wednesday after three thwarted attempts and some hurricanes.

The small, plush toy version of the iconic “Peanuts” character has an important job: zero gravity indicator. These small items are carried onboard as a way to tell when a spacecraft reaches the “weightlessness of microgravity,” NASA says. Soft, light toys like the plush are good for the job because they can’t break anything or hit buttons.

Snoopy is dressed for the occasion in a custom orange flight suit, complete with tiny boots, gloves and a NASA patch. He’ll ride in the Orion capsule with a manikin and two radiation-testing “passengers.”

The daydreaming beagle is no stranger to NASA missions. Apollo X astronauts looked to “Peanuts” for nicknames — the command module was called Charlie Brown, and the lunar module was Snoopy. Another plush Snoopy has been on the International Space Station, and NASA still honors employees with the Silver Snoopy Award.

On a much larger scale, the suited-up beagle is a recent favorite at the Macy’s Thanksgiving Day Parade.

Craig Schulz, son of “Peanuts” creator Charles Schulz, said his father might have considered NASA’s tributes the “biggest honor that could ever be bestowed upon his comic strip.”

“Space travel is almost become so normalized now,” Schulz told the Associated Press last year. “People’s attention span is a little weak, for the most part. So when you inject some of that entertaining Snoopy, you’re going to capture the audience.”

Snoopy’s trip was always part of the plan for the test flight, which has seen several delays and scrubbed launch attempts since its original target date early this year. The Orion spacecraft is set to circle the moon and return to Earth to make sure everything is working for future crewed missions.

Snoopy’s trip around the moon isn’t just for entertainment  — NASA’s collaborations with Peanuts are also meant to educate. Peanuts and its partner GoNoodle previously released activities and short videos for kids to follow Snoopy along in space, like a two-minute video explaining how and why the doll was made. And last year, Apple TV+ released a new season of “Snoopy in Space” about the planets and the search for extraterrestrial life.