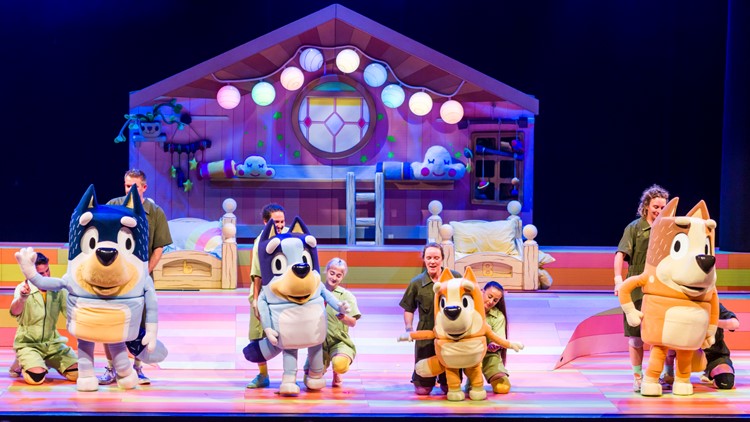 The theatrical adaptation of the children’s show “Bluey” starts a multistate tour this month.

DENVER — One of Australia’s hottest exports is doing a walkabout through America.

The tour will stop at Pueblo’s Memorial Hall on March 2, 2023, and the Buell Theatre in Denver on March 3 and March 5. Tickets are on sale now.

“It’s the one time you really get to share the show with an audience. It doesn’t just disappear onto the screen,” says the show’s creator Joe Brumm who provided a new script for the theatrical event. “I hope America enjoys it.”

The Brisbane-produced “Bluey,” which centers on an eponymous 6-year-old Blue Heeler pup, her sister, Bingo, and their parents, Chilli and Bandit, has in just a few years grown into a worldwide phenomenon.

The show has been praised for its ability to speak honestly about parenting and childhood, with realistic dialogue and creative games. It won an International Emmy Kids Award for best preschool program.

It was up to Brumm to turn his seven-minute animated TV show into a 56-minute stage performance and hand it over to a director, actors and the creative team, something that was a tad jarring.

“It was the first big ‘Bluey’ story I’d written that I didn’t have control over the end result,” he says. “That was a big adjustment to just to bring it out of animation time and into real time.”

“Bluey’s Big Play The Stage Show,” with new music by “Bluey” composer Joff Bush, is a story about sisters, inspired by Brumm watching his oldest daughter getting fed up with her younger sister copying her all the time and wanting to remain unique.”

“As with any ‘Bluey’ episode, what we have happening with the kids is reflected back to the adults. So we find out that mom and her sister are going through their thing as well,” he says.

The creative team decided on child-sized puppets to bring the characters to life, with each manipulated by one of two puppeteers who are fully visible.

“You have to show them,” says director Rosemary Myers of Windmill Theatre Co. “You can’t show them a kind of more abstracted version or adults actors playing dogs. So that’s why we really leaned into the form of puppetry,”

It took Brumm a minute to wrap his head around it, initially worried the audience would just look at the humans. He was convinced the right decision was made when he saw it live.

“Sure enough, within literally 30 seconds of that first performance, I completely tuned the human actors out,” he says, laughing. “So, yeah, it was a journey for me to just hand over that level of control over to the play people. But I think they did brilliantly.”

“We’ve actually added a little more of a tone of participation,” says Myers. “It keeps moving and it’s really dynamic, but it’s also got heart and it’s got got meaning as well, like ‘Bluey’ itself.”

The show made its debut in Australia and was performed 447 times across 65 venues, including the Sydney Opera House.

Myers thinks the theatrical show has captured what the animated show does, which is celebrate the little moments in a young family, like learning to use a water fountain or making friends.

“I think the magic for me is that it’s a very contemporary family that’s depicted,” she says. “Sometimes stuff for children feels a little bit nostalgic or something like that. I feel like it really captures the world that a lot of people live in.”

Brumm says his inspiration is always watching his children navigate the world, listening as their imagination soars. He marvels that they hardly ever need props and that what emerges is usually a “shared bizarreness.”

“When they’re playing these games, they’re usually trying to recreate the adult world, but they don’t know enough about it to get 100% right. And so what ends up for the parents is a really funny environment.”