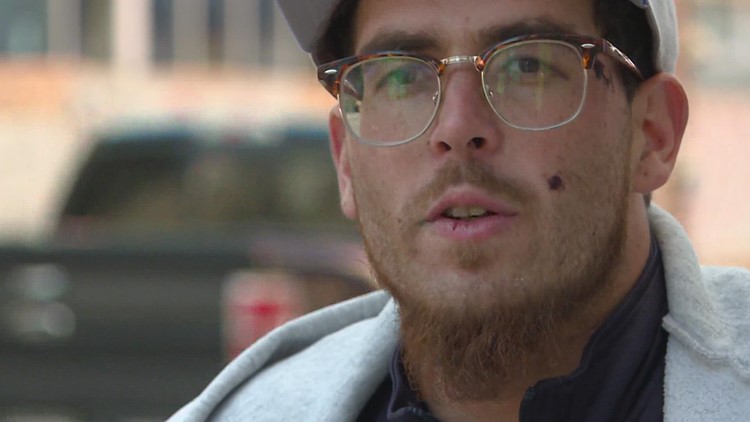 Denver Police said the crash happened at 15th and Stout streets, a block off the 16th Street Mall.

DENVER — His hand is bandaged, his scalp stitched and his leg broken — but Mitchell Garcia considers himself lucky: he survived.

Garcia and his best friend, Aaron Curtis, were walking to the RTD Convention Center station in Downtown Denver after a concert early Saturday morning when a driver in a blue SUV ran them over.

Garcia remembers waking up in the hospital, where he learned his friend since childhood didn’t make it.

“After such a perfect night, this is the way that fate had decided to end it? It seemed very cruel,” Garcia said. “I’m the lucky one.”

Denver Police said it happened as the pair were crossing 15th Street on Stout Street around 4:30 in the morning early Saturday November 12. A driver in a blue Ford SUV hit them and drove off, striking a building at 15th and Arapahoe in the process.

“We see an SUV with super bright headlights,” Garcia said. He remembers his friend cursing in surprise as the car didn’t stop — and that’s it.

“That was the last time I saw someone I considered my brother,” Garcia said. “He was such a vibrant person, full of life.”

Police said officers recovered the car near the Community College of Aurora at 6th and Dayton. Investigators have not made any arrests. According to data from the department, it was at least the 11th deadly hit and run in Denver so far this year.

Garcia had known Curtis since childhood — the pair grew up together. “He was a charming man, he was handsome,” Garcia said. “But within two to three minutes he’d have you at least grinning, if not full-out laughing.”

He said he wants to see justice in his the case — and wants the driver to face punishment. He has no idea why someone would plow into them in the street. “It seems random,” he said.

RELATED: Arrests made after man, dogs killed in hit-and-run crash