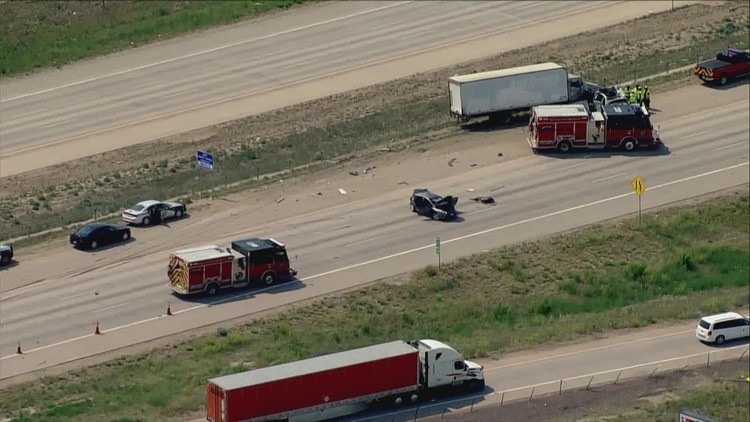 After a 9NEWS investigation, the Postal Service says “the review could include contract revision, adverse action or termination if deemed appropriate.”

DENVER — The United States Postal Service (USPS) is now reviewing the safety record of a trucking company it contracts with that was involved in a crash in northern Colorado that left a family of five dead. This comes after a 9NEWS investigation revealed a history of drivers with Caminantes Trucking getting behind the wheel without valid commercial driver’s licenses.

RELATED: Trucking company in fatal crash had history of letting drivers on the road without proper CDLs, records show

“In light of the recent events, the safety record of this company… is currently being evaluated. Since the inquiry is ongoing, we’re unable able to share details at this time. The results of the review could include contract revision, adverse action or termination if deemed appropriate,” the USPS statement read.

On the afternoon of June 13, a Caminantes truck drove up Interstate 25 in Weld County carrying a load of mail. Documents from Colorado State Patrol investigators show the truck was traveling 75 miles an hour when it crashed into the back of a car that had slowed down for traffic, moving just 5 miles an hour. A federal report shows the truck driver had no commercial driver’s license, or CDL.

The crash killed a family of five driving back home to Wyoming. It also revealed a troubling history for the trucking company from California.

Federal records obtained by 9NEWS show three Caminantes drivers have been caught without valid CDLs. The company has been involved in two deadly crashes within the past two years. The records also show drug and alcohol testing violations. And yet, the company has only been fined $21,460 by the Federal Motor Carriers Association after the crash that killed five.

“I think it’s very egregious,” said Greg Fulton, President of the Colorado Motor Carriers Association. “There were a lot of red flags on this.”

Fulton said he couldn’t believe it when he found out through 9NEWS reporting that the United States Postal Service is still contracting with Caminantes, even after their history of violations.

More than five months after the crash, the Postal Service continues to contract with Caminantes. Only now, after 9NEWS reporting highlighted the company’s history, is the government agency looking into the company itself.

“I was surprised and maybe even shocked, to be honest with you,” said Fulton. “I think they truly need to go back and evaluate what the criteria and whether they were actually following it.”

Caminantes has multiple contracts with the Postal Service and has been contracting with them since at least 2013. So far, the driver of the truck that killed five has not been charged with anything.

The Weld County District Attorney’s Office tells 9NEWS Colorado State Patrol has not yet turned the case over to them for them to review any potential charges. Once the information is given to the DA’s office, it could take anywhere from a few days to several weeks before a decision is made on whether to pursue charges.

Even with this history of violations and deadly crashes, the federal agency overseeing the trucking industry says it’s not enough to shut the company down.

9NEWS has reached out to Caminantes Trucking and their lawyers multiple times via phone, text and email. We’ve yet to receive any responses.

“We don’t want to see something like this happen again,” said Fulton. “It’s a tragedy.”