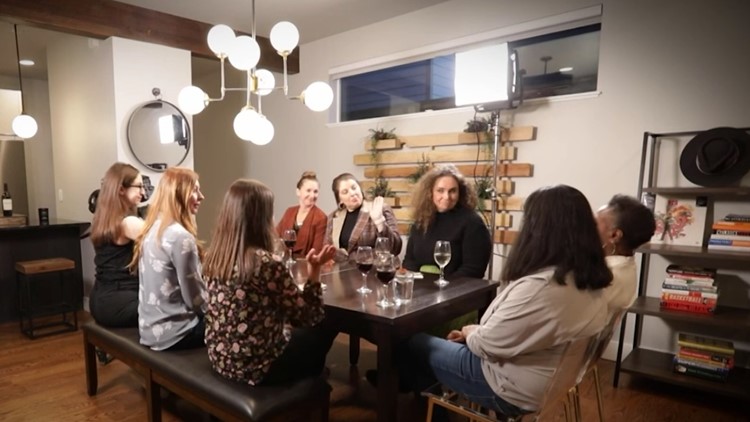 
During Saira Rao‘s unsuccessful run for Congress in 2018, she found her schedule overflowing with coffee dates and campaign events.

“At every event, a line of white ladies wrapped around the door waiting to talk to me to tell me ‘Not me,’ ‘Not all white women,’” Rao said. “My platform was anti-racism, ‘Not me, you’ve got me wrong.’”

Denver native Regina Jackson worked on Rao’s campaign for Congress and had the idea to consolidate these one-on-one anti-racism discussions into a dinner, setting the table to have tough conversations.

“So we did it. We just did one of these dinners, and it was full ‘White Women the Broadway Musical,'” Jackson said. “You know, crying, arms folded, eyes rolled, pacing around the dinner table. We posted about it on Facebook, and it went viral.”

“…and she came up with a brilliant title,” Rao said.


“Race2Dinner,” Jackson said. “And we’ve been doing it ever since.” The first Race2Dinner debuted in February 2019 and has hosted hundreds of women.

Dozens of the deep-dive dinners have taken place from Denver to Chicago to Toronto, requiring a white woman to host at her home for a group of seven friends.

Jackson and Rao don’t pay themselves from the business. They pay the one woman they have on staff and put the rest of the profits back into the business.

The two-hour workshops entail hours of pre-planning for the facilitator, the host and the women attending. Work goes into preparing food and drinks for the dinner and Rao and Jackson make themselves available to attendees after the dinner too.

The duo also has plans to train women over monthly Zoom calls around the country to facilitate their own Race2Dinners at dinner tables in their own communities.


Jackson said white women are trained to be nice. “And part of that niceness means you don’t come to a beautifully prepared dinner table and then leave because something upsets you. So we know they’ll stay, so that’s why we use the dinner,” she said.

“How many of you with us think that you’re racist?” asked Rao to the white women sitting around the dinner table.

A quick look around the room revealed half of the hands in the room were raised.

“How many people at this table, you nice white people, would happily switch places with a Black person in this society?” Rao asked.

Heads began to shake in the negative.

“In 30 seconds, we’ve established you know that you were all racist and that you know the hierarchy,” Rao said. “Black at the bottom, white at the top and the rest of us somewhere between.”

“It’s a country founded on the genocide of indigenous people, the genocide and enslavement of African people and then it is a rinse-and-repeat cycle of hate, hate, hate more hate,” Rao said.

Jackson said the goal of the dinner is for people to have a radically honest conversation about racism and any biases they have.

“You know, I’m old enough to have demonstrated and marched in the 60s, and what I know is as a society, we don’t have honest conversations about race,” she said.

Race2Dinner’s audience is exclusively white women who acknowledge their unchecked biases and are looking to purge the “Karen” inside of them.

“White liberal women are some of the most dangerous people out there,” Rao said. “Because they are the ones changing their Instagram profile to the black box and posting pictures of their kids with lemonade stands for Black Lives Matter and End Asian Hate.”

Rao looked around the dinner table and asked each of the women to talk about one racist thing they’d said, done or thought about recently.

“When we do our marketing, we do any advertising, it is all white…” admitted dinner guest No. 1.

Dinner guest No. 2 said, “I have a young son, and I haven’t purchased any books for him that feature characters that are not white characters.”

Jackson then asked the women, “Do you have any Black or brown or Asian friends?”

Silence from the women around the table. “Uh, I guess that’s no,” said dinner guest No. 2.

“Invite some of your clients to this very special event,” said dinner guest No. 3. “If you look at the type of event, you would think, ‘Well, this is like a white-leaning like a very fancy, higher education institution.’ It’s expensive. I’m thinking about which one of my clients would like to go to this event, who do I know that reads? I invited all white clients for sure.”


Karen (slang): A pejorative term for a white woman perceived as entitled or demanding beyond the scope of what is normal.

According to Rao, most “Karen” offenses aren’t those horrific videos that pop up on your Twitter timeline. Instead, they show up in whispers and hushes.

“Most white women, I think, are not the ‘Karens’ calling the cops on a Black man birdwatching in Central Park or Black people sitting in Starbucks having a coffee,” Rao said. “Most ‘Karens’ are in the board room, silent. Most ‘Karens’ are in schools, silent as their other white women are calling out critical race theory, banning books, they’re sitting silently.”

When you view racism in black and white, you fail to see the shades in between.

“White supremacy is absolutely swastikas, Confederate flags, hoods all of that, but it’s also not getting books for your kid, not having any really meaningful relationship with anyone who’s not white, marketing with images of white people,” Rao said.

“Going to all-white functions and inviting only white people and being silent in the face of racism,” she added. “That is also white supremacy. Once you see it, I promise you, you can’t unsee it. And you will change. You will be different. You’ll start making different choices. You just have to start somewhere.”


“I definitely sweated a lot tonight,” said dinner guest Elke Barter. “Me recognizing that I have racist moments really reaffirms how important this work is and we need to have more conversations.”

Renee Larson attended the dinner, too. “It was definitely uncomfortable at times,” she said. “We have to come to our action and how we think of ourselves on our own not by someone forcing us there.”

While this isn’t a practice in cancel culture, Race2Dinner never shares intimate details of what’s shared at their events. There’s no shaming on social media or specific names used.

The dinner table is a safe space, but there will be no apologies for the direct delivery.

“If no matter how you say it, it’s going to land like that for a lot of white folks. Why not just be blunt?” Rao said.


9NEWS anchor and reporter Alexandra Lewis sat down with Rao and Jackson before attending Race2Dinner to ask the women more questions about confronting racism in America.

“You could be doing anything with your time and energy,” Lewis said. “Why commit to doing this work?”

“I do this work so hopefully Black people can have a better opportunity at work, at jobs, at education,” Rao said. “That’s why I do this work.”

Rao and Jackson said Race2Dinner is about every woman leaving the table a better person.

They said that to truly deconstruct the “Karen” inside a person, explaining that in case of an emergency on an airline flight, you must put on your oxygen mask first before you assist others – and commit to doing your own self-work before helping others.

“Stop taking it personally. It’s institutional. We all come by it honestly, and this binary ‘racist bad, anti-racist good;’ it’s not,” said Rao. “You’re not bad for being a human. You become bad when you acknowledge it and you refuse to do something about it.”