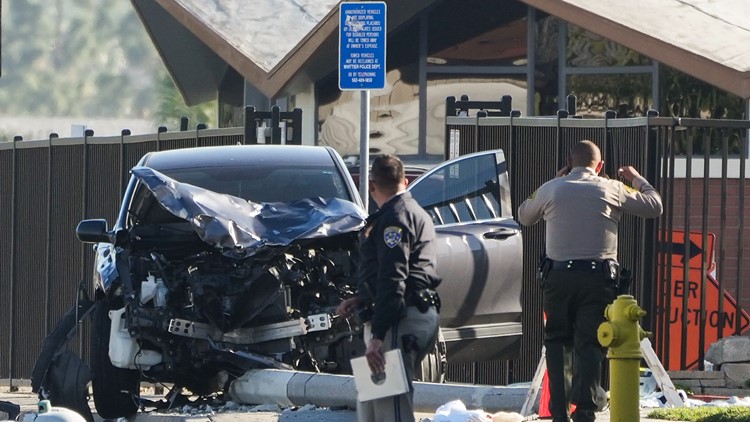 The 22-year-old driver veered onto the wrong side of the road early Wednesday and plowed into law enforcement recruits on a training run.

LOS ANGELES — Citing the need for further investigation, authorities released a 22-year-old man who was arrested on suspicion of attempted murder of a peace officer after the SUV he was driving veered into the wrong lane and crashed into Los Angeles County law enforcement recruits on a training run, injuring 25 of them.

Nicholas Joseph Gutierrez, of Diamond Bar, was released late Thursday. NBC4LA broadcast footage of him arriving home and reported that he didn’t answer any questions.

“Due to the extreme complexity of the investigation, which includes ongoing interviews, video surveillance review, and additional evidence needed to be analyzed, homicide investigators have released Mr. Gutierrez from the Sheriff’s Department custody today at approximately 9:55 PM,” the Los Angeles County Sheriff’s Department said in a statement.

Authorities identified Gutierrez as the driver of an SUV that veered onto the wrong side of the road early Wednesday in the suburban Whittier area, where a sheriff’s academy facility is located.

Seventy-five recruits for the sheriff’s department and other law enforcement agencies were on a routine early-morning run in formation through the area. The group included two law enforcement vehicles and eight road guards wearing reflective vests, as well as drill instructors who are sworn officers, authorities said.

Five of the recruits were critically injured and two remained in critical condition Thursday afternoon, according to the department.

Sheriff Alex Villanueva said at a news conference a few hours after the crash that “so far, it looks like it’s an accident, a horrific accident,” but Gutierrez was arrested later that afternoon.

Villanueva told NewsNation on Thursday that investigators believe the crash was a “deliberate act” and that there was probable cause to make the arrest.

But he said Gutierrez was going to be “provisionally” released “until we can have the case iron clad, iron proof, and submitted to the DA for filing consideration. Right now, we want to tie up all the loose ends on the case and then present it to the DA.”

Christine Periman, who lives near the crash site, said she woke up to a devastating scene unfolding outside her home early Wednesday with recruits scattered along the street and one victim whose leg was turning blue.

“It seemed like the sirens just kept coming for about two hours,” she said. “It was just horrific.”

She said the recruits regularly ran by her home, and teared up thinking they might not anymore.

It will be up to the county district attorney to decide whether Gutierrez will be charged and for what offense. Gutierrez could not be reached for comment and it was unclear if he has a lawyer.

The case has not been formally referred to the district attorney’s office for prosecution. The Los Angeles County District Attorney’s office said in an email that sheriff’s and highway patrol authorities advised late Thursday that they wouldn’t be presenting a case at this time and that the suspect would be released.

Some had questioned whether sheriff’s authorities were being overzealous in moving so quickly to arrest Gutierrez for investigation of the attempted murder of a peace officer.

In Los Angeles County, the sheriff has had a long-running dispute with the district attorney, George Gascón. Gascón was elected to his office as a progressive reformer and his critics have blasted him as being soft on crime.

In the NewsNation interview, Villanueva — who conceded defeat earlier this week in his own reelection bid — referenced the tensions with Gascón, saying “we definitely have grave concerns about his ability to prosecute.”

Laurie Levenson, a former federal prosecutor and criminal law professor at Loyola Law School who isn’t affiliated with the case, said attempted murder usually means there was intent to kill and the driver wasn’t simply distracted or didn’t lose control of the vehicle.

In an interview before the driver’s release, Levenson also said a key question is whether the sheriff’s department can perform an objective evaluation given that the agency’s recruits were victims of the crash. That’s why it’s also important that prosecutors review the evidence and ultimately be the ones who decide, she added.

“They’ve gone after the highest possible charge — there is no doubt about it,” Levenson said of investigators. “The question is whether they are objective enough in evaluating this given that the crime was committed against their own. We’ve got to see what the evidence shows.”

Authorities said a field sobriety test performed on the driver was negative.

Rory Little, a professor at UC Hastings College of Law, said having sheriff’s authorities take a closer look at the evidence could signal that an agency is being appropriately cautious, not a need for suspicion. Larger law enforcement agencies typically don’t have trouble finding investigators not associated with a case to work on it, he said.

“If the sheriff’s department actually said ‘wait a minute, slow down here,’ that’s probably a good reflection on the department,” Little said. “It’s too early to judge anything.”