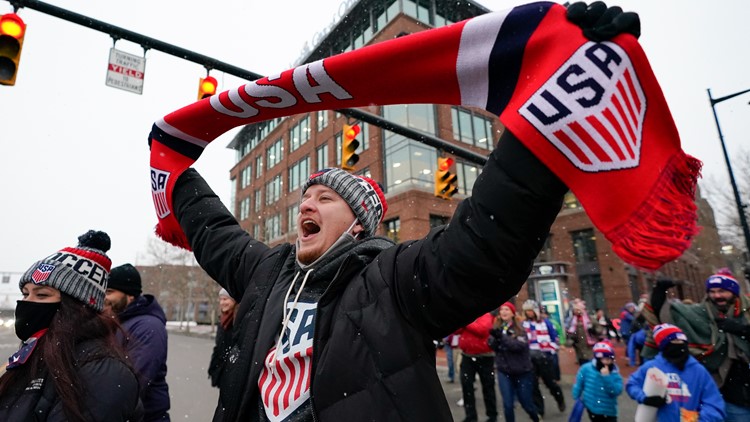 The U.S. Men’s National Team opens up against Wales Monday at noon.

DENVER — The U.S. Men’s National Team is back in the World Cup after they did not secure a spot in 2018’s tournament.

The 2022 World Cup is being held in Qatar. The tournament begins Sunday and runs through December.

The U.S. squad begins its march to the World Cup trophy on Monday against Wales. The USMNT also faces England and Iran in the group stage. The U.S. team features Ethan Horvath, who is from Highlands Ranch.

Here are some places around the Denver area that will be showing the games.

The Colorado Rapids announced they teamed up with DNVR Bar to watch every World Cup game. The Rapids said there will be merchandise and other giveaways during the USMNT and Mexico matches throughout the tournament.

The Celtic on Market

The Celtic on Market is opening (very) early Monday to show England vs. Iran, followed by the U.S.-Wales game at noon. Doors open at 6 a.m. The American Outlaws Denver chapter said on their Facebook page that The Celtic is where all of their watch parties will be held. The Celtic said reservations are not being taken, so come early to secure a spot.

The Celtic is located at the corner of 14th Street and Market Street in downtown Denver.

The spot synonymous with soccer around Denver is hosting watch parties for the entirety of the World Cup. They also announced on their Instagram page that the Bulldog’s sister restaurant, Ice House, will have overflow seating and that there will be shuttle service available between the two locations.

The American Outlaws Boulder chapter said they will be hosting watch parties for all of the USMNT games at SkyBox Bar & Cafe located inside Boulder Indoor Soccer.

The complex is located at 3203 Pearl St. in Boulder.

For fans in Northern Colorado, the American Outlaws Fort Collins chapter said they will be watching games at Snack Attack.

The Colorado Soccer Association has teamed up with Tom’s Watch Bar to host USMNT watch parties. Tom’s is located at McGregor Square across from Coors Field.