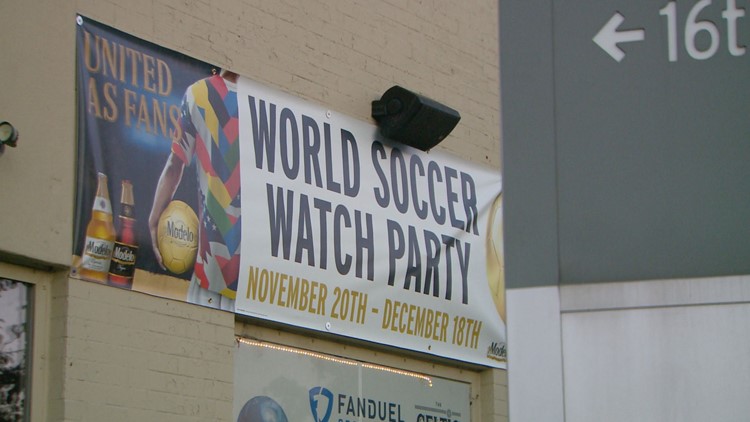 The preparations don’t come without acknowledgement of several controversies surrounding Qatar, including the country’s track record on human rights.

DENVER — One of the world’s biggest sporting events, the 2022 FIFA World Cup, kicks off this weekend in Qatar.

Several bars in Denver are preparing to host watch parties – including the British Bulldog, which partnered with Icehouse Tavern to serve as a venue for overflow crowds.

Over on Market Street, Celtic, which has long been host to several groups of soccer fans, is expecting to be at capacity for U.S., Mexico and England games.

“With regards to soccer we have the best fans in the world,” said owner Noel Hickey. “We got quite the plethora of soccer fans here.”

Hickey has owned the bar for more than two decades, and hosted several World Cups before.

“Well obviously it really increases business, particularly this time of year because it’s the first World Cup ever held in the winter,” he said. “I’m very excited.”

But this year’s competition has been surrounded by controversy; from allegations of corruption behind Qatar’s winning bid, to the country’s track record on human rights when the stadiums were being built, and the country’s laws banning LGBTQ relationships.

Across the world, people have either called to boycott the tournament, or protested it in some way.

“Well it’s different in many many ways,” Hickey said. “It really has been a very difficult …two or three years build up.”

Hickey, who is originally from Gallway, Ireland, acknowledged the controversy surrounding the tournament, adding that if his home country had qualified, he would not go to the World Cup in person.

However, Hickey is also hoping to provide a positive atmosphere.

“People are going to watch it regardless of the sort of background to it – we’re just supplying an area to watch it and creating an atmosphere,” he said.

Kishore Kulkarni, a distinguished professor of economics at MSU Denver, believes that Qatar’s economy could be impacted by the controversy.

“It is not a good precedent and it is a negative effect on the economy. politically, they have to do a lot of cover-up after that and all those things are, in a way, significant for Qatar,” Kulkarni said.

He adds that he believes the labor market specifically could be impacted.

RELATED: Here’s where to watch the USMNT in the World Cup