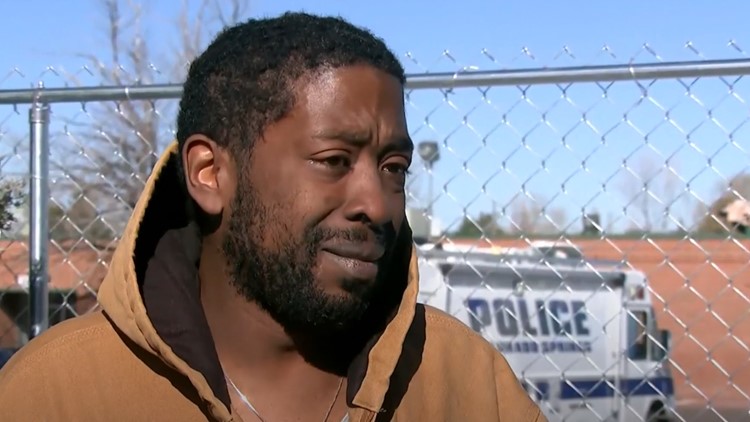 Justin Thurman said he was on the dance floor of Club Q when the shooting started and he ran.

COLORADO SPRINGS, Colo. — A man who was inside the Colorado Springs nightclub on Saturday night described what happened when a gunman walked through the front door and opened fire into the crowd.

Joshua Thurman said he was on the dance floor of Club Q when he heard four to five shots, and at first he thought it was the music. Then came another round of shots, and he saw the flash from the muzzle.

Five people were killed and 25 injured in the shooting in the LGBTQ+ nightclub, located at 2430 N. Academy Blvd. Two patrons fought with the suspect, 22-year-old Anderson Lee Aldrich, and stopped him from killing anyone else, according to police.

Thurman said that after the second round of gunshots, he ran into a dressing room and took refuge there with two other people.

“We closed and locked the doors,” he said. “We got down on the ground and cut off all the lights. We heard everything. We heard a third round of shots. We heard the assailant be detained by, we assume, employees of Club Q. We heard the police come in. We heard yelling.”

He said they were, “Shaking, crying, fearing for our lives. I’m thinking that at any moment, this man could bust through the door and kill us, if he really wanted to.”

> Watch the full interview with Justin Thurman below:

The first calls to police about an active shooter were at 11:57 p.m. Police got to the nightclub at midnight and took the suspect into custody at 12:02 p.m.

Of the 25 injured in the shooting, at least seven were in critical condition, authorities said. Some were hurt trying to flee, and it was unclear whether all of the victims were shot, The Associated Press reported.

Colorado Springs Police has not released any information on a possible motive of the shooting.

“Our safe space is no longer our safe space, and we are a broken community,” Thurman said. “We shouldn’t have to come together after something like this.”

RELATED: How to donate to victims of the Club Q shooting in Colorado Springs

RELATED: How to customize the stories and alerts you get from 9NEWS

You can watch videos on demand from our top stories, local politics, investigations, Colorado specific features and even classic 9NEWS videos from the 1980s. If you missed a special program, such as a documentary, you will find them in the “9NEWS Original” channel on the app.

> See a typo in one of our stories? Let us know so we can fix it! Email viewerfeedback@9news.com.