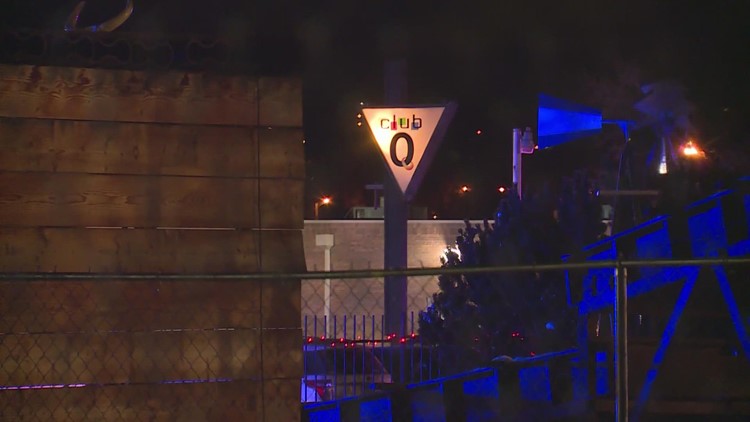 The shooting Saturday night in Colorado Springs has sparked messages of support from local organizations and elected officials.

DENVER — After a deadly shooting at a Colorado Springs LGBTQ+ nightclub, many organizations and elected officials offered words of support to those effected.

The shooting happened just before midnight at Club Q, killing five people and injuring 18, according to the Colorado Springs Police Department (CSPD).

The suspect, 22-year-old Anderson Lee Aldrich, was found inside the nightclub after police responded to calls of an active shooter, police said. He was transported to the hospital for a medical evaluation and is in custody, according to police.

Two patrons of the nightclub managed to fight with Aldrich to keep him from injuring more people inside the club, according the CSPD.

News of the shooting prompted messages of support from multiple organizations and elected officials.

The Center on Colfax, an organization promoting a safe and welcoming space for Colorado’s LGBTQ+ community issued this statement on their Facebook page: “We are shocked and saddened to wake up to this tragic news of a senseless act of violence against the LGBTQ community. We are grief-stricken on behalf of the friends and family of those who died and on behalf of the Colorado Springs community who are coping with these tragic losses at a time when many families are preparing to gather for the holidays. “

“While no motive in this attack is yet clear, we know that the LGBTQI+ community has been subjected to horrific hate violence in recent years. Gun violence continues to have a devastating and particular impact on LGBTQI+ communities across our nation and threats of violence are increasing. We saw it six years ago in Orlando, when our nation suffered the deadliest attack affecting the LGBTQI+ community in American history. We continue to see it in the epidemic of violence and murder against transgender women – especially transgender women of color. And tragically, we saw it last night in this devastating attack by a gunman wielding a long rifle at an LGBTQI+ nightclub in Colorado Springs.

“Places that are supposed to be safe spaces of acceptance and celebration should never be turned into places of terror and violence. Yet it happens far too often. We must drive out the inequities that contribute to violence against LGBTQI+ people. We cannot and must not tolerate hate.”

Sen. Michael Bennet had this to say: “I’m devastated to hear about the shooting in Colorado Springs that cut five more lives tragically short. I’m thinking of their families and loved ones, and sending strength to those who were injured, the survivors, and Colorado’s LGBTQ community. As we seek justice for this unimaginable act, we must do more to protect the LGBTQ community and stand firm against discrimination and hate in every form.”

General manager of Triangle, Sean O’Grady, issued this statement: “Tonight, our LGBTQIA family in Colorado Springs faced a terrifying and abhorrent act of violence because of who they are and who they love. Our hearts are with our Colorado Springs family. Out of an abundance of caution and to allow our team to leave to be with their loved ones, we ended our night slightly early. Our hearts are with everyone affected. We will return tomorrow with extra security precautions in place. We stand with our Colorado Springs family and are here to support them any way we can.”

Colorado Gov. Jared Polis released this statement: “This is horrific, sickening, and devastating. My heart breaks for the family and friends of those lost, injured, and traumatized in this horrific shooting. I have spoken with Mayor Suthers and made it clear that every state resource is available to local law enforcement in Colorado Springs. We are eternally grateful for the brave individuals who blocked the gunman likely saving lives in the process and for the first responders who responded swiftly to this horrific shooting. Colorado stands with our LGTBQ community and everyone impacted by this tragedy as we mourn together.”

Former U.S. Rep Gabrielle Giffords said in a statement: “I’m devastated over last night’s attack against the LGBTQ+ community in Colorado Springs. Club Q was described as a fun and inclusive local venue, a place to escape hate, discrimination, and violence. This sense of refuge was obliterated in a hail of bullets. No one should fear for their lives because of who they are or who they love, but sadly our nation’s gun laws too frequently allow individuals motivated by hate to commit heinous acts of violence. Colorado has seen far too many acts of violence. We grieve with the LGBTQ+ and Colorado Springs communities. We must, can, and will do more to disarm hate and protect our communities from gun violence.”

El Paso County Public Health offered resources for those who need to talk:

We are deeply saddened by the senseless shooting that occurred early this morning in Colorado Springs at Club Q, and our thoughts and prayers are with all who are impacted. The Colorado Crisis Services Hotline is available 24/7: Call 1-844-493-8255, or text “TALK” to 38255.

The Denver Broncos will be holding a moment of silence for the victims of the shooting before today’s game against the Las Vegas Raiders:

Our hearts go out to the victims of the senseless act of violence that occurred last night in Colorado Springs. There is no place for hate, and we stand with the LGBTQ+ community and all impacted.

We will hold a moment of silence before today’s game remembering the lives lost. pic.twitter.com/y7TSuyGvMi

The Aurora Police Department sent out a tweet showing support for the LGBTQ+ community:

We are sending love & support to the LGBTQ+ Community, @CSPDPIO & CO Springs. We wont tolerate crimes that are perpetrated against someone b/c of their sexual orientation or gender identity. Please continue to be vigilant & report suspicious or bias-motivated activity immediately pic.twitter.com/VKUpvtAReh