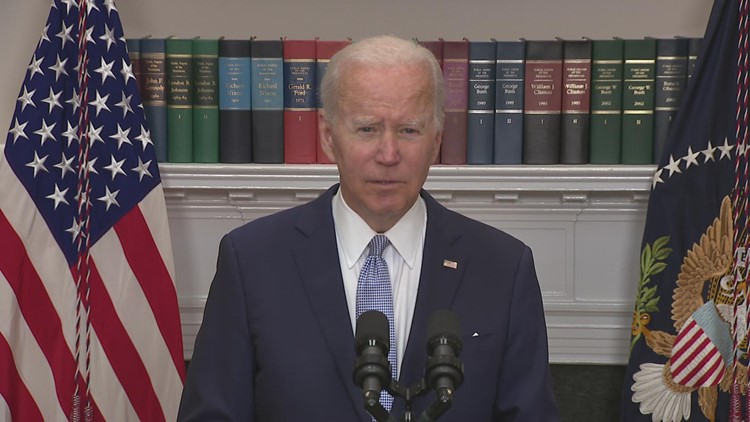 COLORADO SPRINGS, Colo. — U.S. President Joe Biden said “we cannot and must not tolerate hate” in a statement Sunday following a deadly shooting Saturday night at an LGBTQ+ nightclub in Colorado Springs, where a man opened fire, killing at least 5 people and injuring 25.

In his statement, Biden took aim at gun violence that he said continues to plague LGBTQ+ communities. His full statement is below:

“While no motive in this attack is yet clear, we know that the LGBTQI+ community has been subjected to horrific hate violence in recent years. Gun violence continues to have a devastating and particular impact on LGBTQI+ communities across our nation and threats of violence are increasing.

“We saw it six years ago in Orlando, when our nation suffered the deadliest attack affecting the LGBTQI+ community in American history,” he said. “We continue to see it in the epidemic of violence and murder against transgender women – especially transgender women of color. And tragically, we saw it last night in this devastating attack by a gunman wielding a long rifle at an LGBTQI+ nightclub in Colorado Springs.

“Places that are supposed to be safe spaces of acceptance and celebration should never be turned into places of terror and violence. Yet it happens far too often. We must drive out the inequities that contribute to violence against LGBTQI+ people. We cannot and must not tolerate hate.

“Today, yet another community in America has been torn apart by gun violence. More families left with an empty chair at the table and hole in their lives that cannot be filled. When will we decide we’ve had enough? We must address the public health epidemic of gun violence in all of its forms. Earlier this year, I signed the most significant gun safety law in nearly three decades, in addition to taking other historic actions. But we must do more. We need to enact an assault weapons ban to get weapons of war off America’s streets.

Today, Jill and I are praying for the families of the five people killed in Colorado Springs last night, and for those injured in this senseless attack.”

At about 11:57 p.m. Saturday, officers received numerous calls about an active shooter at Club Q, a LGBTQ+ nightclub in the 3400 block of North Academy Boulevard, according to the Colorado Springs Police Department (CSPD).

During a news conference Sunday morning, CSPD Police Chief Adrian Vasquez said the suspect, Anderson Lee Aldrich, 22, entered the nightclub Saturday night and immediately started shooting. Two patrons of the nightclub fought with Aldrich and prevented him from injuring more people inside the club, according to Vasquez.

Police arrived on the scene at about midnight and found Aldrich inside the nightclub. Aldrich was transported to the hospital to receive medical attention and has been taken into custody, according to CSPD.

Multiple victims were taken to local hospitals by ambulance and police cruisers, Castro said during the news conference. CSPD is working to identify the victims and notify their families.

Police say Aldrich used a “long rifle” during the shooting, but did not have any more specifics as to what firearms were used and where they were obtained.

The shooting shocked many in the nation, and Biden wasn’t the only one reacting. He was also joined by community members, officials and organizations that support LBGTQ+ communities, including the Denver Broncos, who announced they would hold a moment of silence before Sunday’s scheduled game, to honor the victims of the shooting.