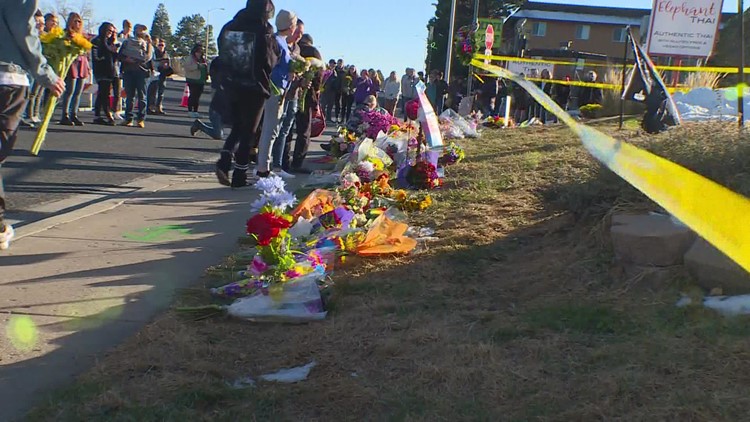 “It’s just hard to feel like we can have a safe spot in Colorado anymore,” Monique Gonzalez said. “Because that was one of our safe spots.”

COLORADO SPRINGS, Colo. — A memorial grew outside of Club Q Sunday night, the day after five people were killed and 25 others injured in a shooting at the LGBTQ+ nightclub in Colorado Springs.

Beyond the police tape, a space that used to feel safe now feels far away to a community in mourning.

“It’s just hard to feel like we can have a safe spot in Colorado anymore,” Monique Gonzalez said. “Because that was one of our safe spots.”

Gonzalez and her girlfriend Phylicia Bacon showed up to Club Q just minutes after the shooting early Sunday morning. The police cars in the parking lot made them go home.

“As a lesbian, or gay, or trans, anything like that, it’s just hard to know that everywhere we go, we get attacked, and we can never have a safe spot for ourselves,” Gonzalez said.

Gonzalez and Bacon knew the LGBTQ+ bar as a place where they could go and be their true selves — until Saturday night.

“I’m still waiting to see who else was injured at the place, and who else was killed,” Gonzalez said. “I want to know everybody, because I want to make sure that it was nobody that I was really, really close with.”

Investigators have not yet released the names of the victims.

Joshua Thurman said he was on the dance floor when he heard shots ring out. He hid inside a dressing room.

“I’m thinking that at any second, this man could just bust through the door and kill us if he really wanted to,” Thurman said.