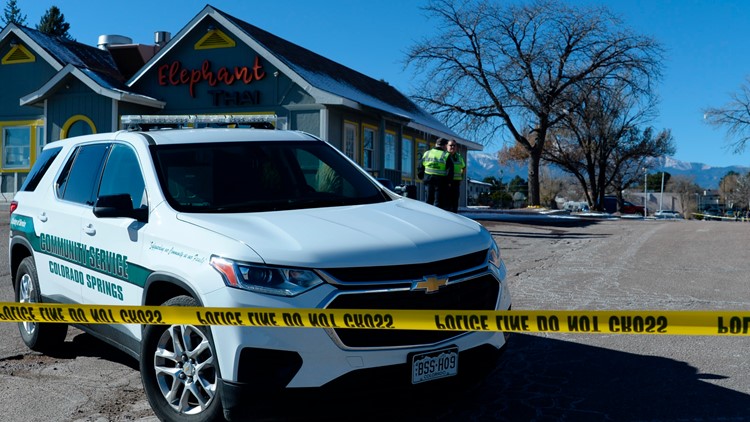 Anderson Lee Aldrich, 22, is being held on suspicion of 10 counts of first-degree murder and bias-motivated crimes.

COLORADO SPRINGS, Colo. — Charges of murder and bias-motivated crimes have been recommended for the man arrested in connection to a shooting at an LGBTQ+ nightclub in Colorado Springs that left five dead and as many as 25 injured.

Court records show Anderson Lee Aldrich, 22, is being held on suspicion of the following in the shooting at Club Q:

Aldrich was arrested within minutes of the first call to police, according to authorities.

Police Chief Adrian Vasquez said the suspect, 22-year-old Anderson Lee Aldrich, entered the nightclub and immediately started shooting. Two patrons fought with the gunman and prevented him from injuring more people, Vasquez said. He said less than a minute went by between the gunman arriving and the two patrons taking him down.

Police said they arrived on the scene at midnight and took Aldrich into custody inside the nightclub at 12:02 a.m.

Multiple victims were taken to local hospitals by ambulance and police cruisers, Castro said. CSPD was working to identify the victims and notify their families.

Aldrich was also taken to the hospital to receive medical attention, according to CSPD.

Of the 25 injured, at least seven were in critical condition, authorities said. Some were hurt trying to flee, and it was unclear whether all of the victims were shot, a police spokesperson told The Associated Press.

UCHealth Memorial Hospital Central said as of Sunday evening, they were caring for 10 patients who were injured in the shooting. They said one patient has been discharged.

A year and a half before he was arrested, Anderson Lee Aldrich allegedly threatened his mother with a homemade bomb, forcing neighbors in surrounding homes to evacuate while the bomb squad and crisis negotiators talked him into surrendering.

Yet despite that scare, there’s no record prosecutors ever moved forward with felony kidnapping and menacing charges against Aldrich, or that police or relatives tried to trigger Colorado’s “red flag” law that would have allowed authorities to seize the weapons and ammo the man’s mother says he had with him.

Gun control advocates say Aldrich’s June 2021 threat is a example of a red flag law ignored, with potentially deadly consequences. While it’s not clear the law could have prevented Saturday night’s attack — such gun seizures can be in effect for as little as 14 days and be extended by a judge in six-month increments — they say it could have at least slowed Aldrich and raised his profile with law enforcement.

The Associated Press contributed to this report.