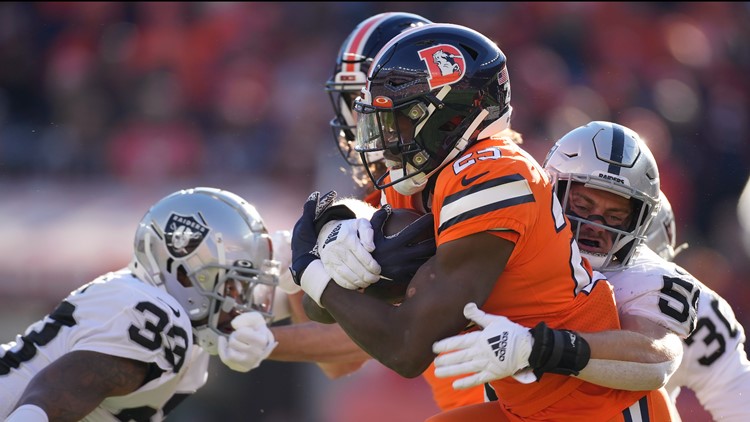 The Broncos’ starting running back fumbled at the goal line again on Sunday in a loss to the Las Vegas Raiders. It was his fifth fumble this season.

“I don’t think that’s the reason we lost the game because we recovered it but it definitely didn’t help,” Gordon said after Sunday’s game. “When I do stuff like that I put myself on a short leash. I get taken out of the game. But I can’t be mad at anybody but myself.”

Originally signed by the Broncos to a two-year, $16 million deal, Gordon had back-to-back 900-yard rushing seasons. Broncos General Manager George Paton brought Gordon back this season on a one-year contract for $2.5 million.

“We were all in a flow, a better flow,” Gordon said. “The second half we came out and were back to our old selves. I blame myself because I didn’t play much. I made that mistake right at the end of the half, shot my own self in the foot and got taken out.

“This hurt because I was feeling it. I was seeing it. The line was blocking their butts off and giving us big enough creases to make it happen. And after that mistake I stopped myself from more opportunities.”

The Broncos began the season with Javonte Williams and Gordon as their top 2 running backs — as they were last year. Williams suffered a season-ending torn ACL injury in game 4 against the Raiders — a game in which Gordon had a fumble returned for a touchdown in a 32-23 loss — and now Gordon has been wavied.

With Gordon now gone, the Broncos top two running backs will be Latavius Murray, who was signed after Williams went down, and Marlon Mack, the former 1,000-yard rusher who was signed three weeks ago off the 49ers’ practice squad. The Broncos also have running back Devine Ozigbo on their practice squad while Mike Boone is a week away from returning off injured reserve with his high ankle sprain.

With the Broncos losing all 7 games by 9 points or less, Gordon’s fumble issues became too great a margin for error.

“Coulda, shoulda, woulda, that’s the story,” said Gordon after the Broncos’ overtime loss Sunday to the Raiders. “It could be different. We could be winning by that same small margin we’ve been losing by.”

Broncos announce RB Melvin Gordon Iii is waived. Had back-to-back 900-yard rushing seasons under 2-yr, $16m deal. A surprise when he was brought back for one year, $2.5m. Fumbles obviously the problem. #9sports

After Gordon’s first-half fumble on Sunday, social media reaction was swift in calling for the running back to be benched or released.

I know he’s a good player, but you gotta put Melvin Gordon on the bench. Bad plays lead to bad plays!!!!

That should be the absolute last time Melvin Gordon ever touches a football in a Denver Broncos uniform. It’s inexplicable. Cut him at halftime. How are we STILL having these conversations?!

All M. Gordon does is fumble the FCKING 🏈. Every FCKING time in a crucial situation

Points are off the score bored because of one person only, Already had the first down. Fighting for yards, coughs it up and hurts his teammates. Enough is enough. Took a huge step in the right direction by removing yourself from calling plays. Now it’s time for a 2nd step #BENCH

Did Melvin Gordon single-handedly cost the Broncos the game? No

Do the Broncos win if he doesn’t fumble that ball? 99.9% chance they do#BroncosCountry

I’m sorry, but Melvin Gordon should be cut at halftime!

Gordon fumbles…you gotta be kidding me

Melvin Gordon nearly cost the Broncos AGAIN. It’s not on him at this point though. He is who he is. We all know that. Giving him the ball is on THESE COACHES.

Did Gordon need to be cut?Yes. Of course. But that needed to happen a month ago. This was a simple move. Putting Gordon back on the team was an epic fail by the GM.