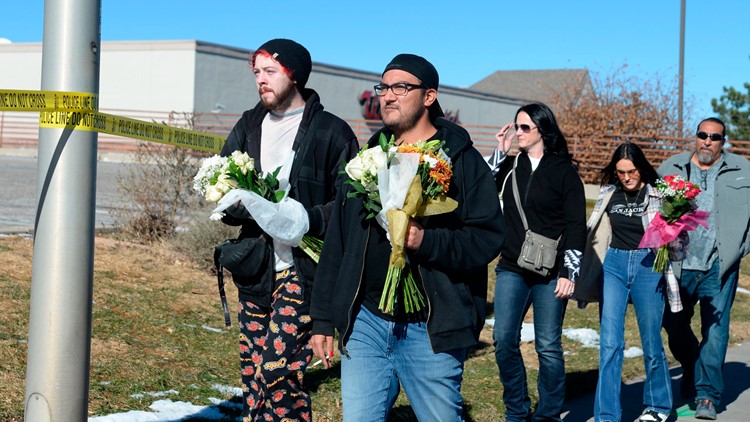 Outside Club Q in Colorado Springs, people left flowers and signs in a memorial to the victims.

COLORADO SPRINGS, Colo. — Mourners gathered across Colorado Sunday to honor the victims of a shooting that killed five people and injured 25 others at an LGBTQ+ nightclub Saturday night.

Outside Club Q in Colorado Springs, people left flowers and signs in a memorial to the victims. A vigil will be held there at 7 p.m. Sunday.

“I had just given a friend a ride back down, and he actually had said, ‘take me to the club instead of taking me home,’ and so I took him there and dropped him off,” Shelton said.

“About 10 minutes after I got home, within that small time frame, I got a call from a friend saying that there was a shooter,” Shelton said.

Shelton said his friend Ed was shot twice, but survived. He had surgery Sunday, and Shelton said he seems to be doing well.

Others weren’t as lucky.

“Throughout the night it’s just been a series of information trickling in and finding out that our close friends actually are dead,” Jasmine Warner said.

RELATED: How to donate to victims of the Club Q shooting in Colorado Springs

Across the country, a vigil is being held Sunday evening in West Hollywood, California in solidarity with the LGBTQ community of Colorado Springs.

A candlelight vigil is scheduled for 7:30 p.m. Sunday at the Cheesman Park pavilion in Denver.

Monday, a vigil will be held at Tracks, an LGBTQ+ nightclub in Denver. That vigil, in partnership with Interfaith Alliance of Colorado, will begin at 7 p.m.

“That’s what I feel people who do these types of things would want you to do, to run inside and hide. And ultimately if you do those things it’s letting them win,” Warner said. “I know that my friends that we lost wouldn’t want that.”