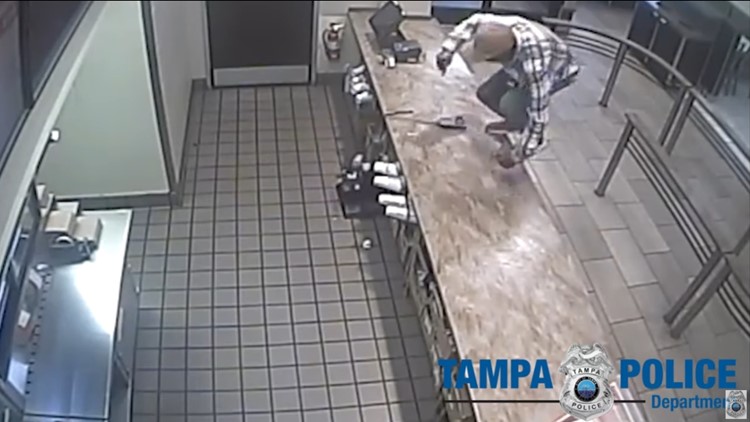 A man demanded free food from employees while threatening them with pliers, police said.

TAMPA, Fla. — A manager at a Burger King in Tampa used her quick thinking to alert a customer in the drive-thru line to call 911 during a robbery, police report.

The employees reportedly refused his demand. That’s when surveillance video released by Tampa Police Department shows the man appearing to yell at the cashier counter before pulling out a set of pliers from his pocket and walking toward them.

The man banged the pliers on the counter, struck a cash register and knocked it over before leaping over the counter “where he continued to making threats,” police said.

That’s when the manager “discreetly” let a drive-thru customer know through her radio headset that they were in danger and to call 911. The manager was also forced to give the man food.

Police quickly arrived at the fast-food eatery and located the robber eating his food in the men’s restroom. He’s been identified as 50-year-old Hubert Credit, Jr.

Officers ordered Credit to exit the stall, he complied and was taken into custody, Tampa police said. He was charged with robbery with a deadly weapon.

There were no reported injuries during the robbery, authorities say. Credit’s bond is set at $15,500, records show.