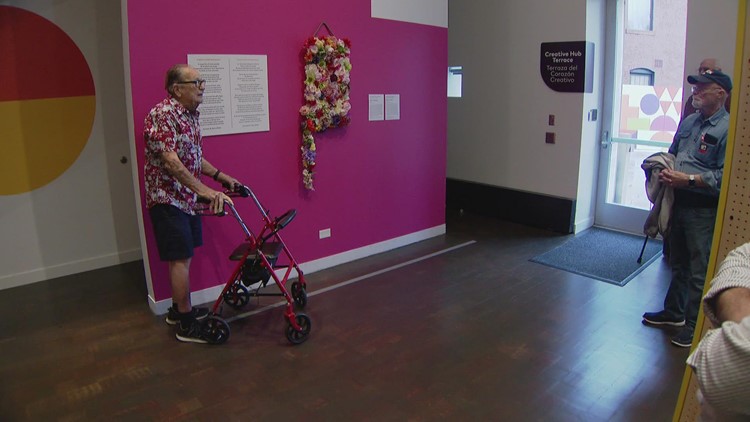 With paint, paper and a lot of creativity, the West of 50 Art Club gives its members community and the opportunity to tell their stories through art.

DENVER — Beyond the famous names hanging in the halls of the Denver Art Museum are pieces by a group of local artists whose works give them the opportunity to show their true selves – stories that have been hidden for decades.

“I’m wide open now with everything since I came out,” artist Ken Felts said. “I like to express it wherever I can.”

Felts said he knew he was gay at age 12 but chose to hide it as he grew up in a churchgoing family in a small town in Kansas. He continued to hide his true self for nearly 80 years, before coming out when he was 90 years old. He’s now 92.

“People who know me say I lost 20 years when I came out and started living my life,” he said. “They look at me and say, you look 20 years younger.”

Another member of the club, Keithland Wilhite, said the group is a safe environment to be in. In the classroom – surrounded by paint, paper and a whole lot of creativity – his art can be whatever he wants it to be.

He changed his work schedule so he could attend class every week. He said he knows the room is full of people who provide the community he needs.

“We engage in art together, learn from each other, and I think encourage each other,” he said.

These artists know what it’s like to not be able to share their truth. Now their work gives them opportunity to tell the world who they really are.

“I think this is probably the capstone of my long life,” Felts said. “I’m 92, and there have been many things that have happened over the years. But this is really topping it all off, to be here at the Denver Museum with the things I’ve done.”

The exhibit of the club’s artwork continues through Dec. 31 in the Creative Hub in the Martin Building of the Denver Art Museum. It’s included with general museum admission.