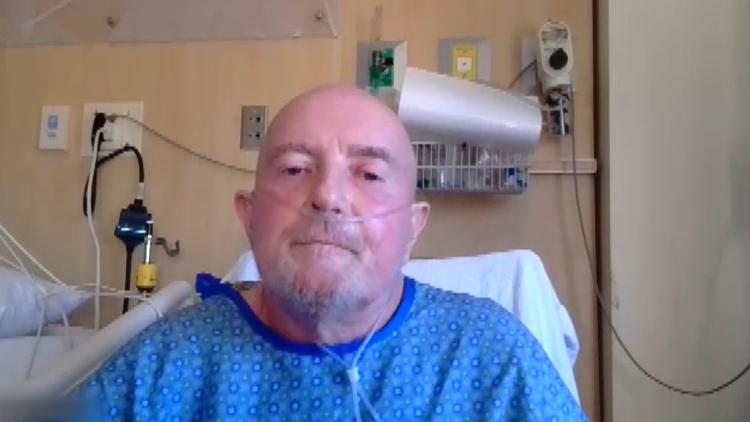 “I was a lucky one, because I got to come home to my children with minor injuries,” one victim said. “But I lost a big part of myself with everything that happened”

Some of the victims are still recovering at hospitals, while others are healing from home.

9NEWS spoke to two people who said they were inside the club when the gunman opened fire.

Ed Sanders was on his way back from an event in Denver when he told his ride, Joseph Shelton, to drop him off at Club Q.

“Got in line for a drink, and as I was getting my drink, the shooting started,” he said via Zoom from his hospital bed at Memorial Hospital in Colorado Springs. “I got hit in the back first and I turned around and saw him and it was very fast, two volleys at us, and the second one got my leg and then I went down.”

Sanders said when he fell to the ground he noticed someone next to him was also hurt.

“There was a woman that got shot next to me that was trying to help breathe, and I don’t know her disposition at this time, but we’re still waiting to release the names. I’ll probably know them. I’m kind of preparing myself,” he said.

Sanders knew at least two of the people killed in the shooting, Daniel Aston and Derrick Rump. They were bartenders at Club Q and his longtime friends.

RELATED: 5 victims who were killed in LGBTQ+ nightclub shooting identified

“Club Q is like a family to me, and I’ve been going there for 20 years. It’s like coming home to family,” he said. “I think I’m still in shock. It hasn’t really sunk in that these people are gone.”

Jerecho Loveall knows he was fortunate to survive, but as he grieves the loss of dear friends, he said it is hard to feel that way.

“Yes, I was a lucky one, because I got to come home to my children with minor injuries,” he said on Monday. “But I lost a big part of myself with everything that happened Saturday night.”

Loveall said he was standing at the bar taking a break from dancing when gunfire broke out.

“All you hear is shots,” he said. “Then [the gunman] walks across the bar, you hear shots, you feel them coming past you, and glass around you is shattering.”

Loveall said he dropped to the ground. When he tried to get up, he said, a bartender yelled at him to stay on the ground before running to help others. He said that was Derrick Rump.

“He was one of the most amazing spirits. Always very accepting. He loved everybody,” Loveall said. “He wanted everybody to feel safe at that bar.”

Loveall said after the gunfire stopped, he got up to look for the people he went to the club with. He found most of them outside. He also found that he was injured.

“I thought maybe it was scratch from falling or glass, but the officer wrapped it up and said, ‘You need to get to the hospital. It looks like a gunshot wound,” he said.

Loveall self-transported to St. Francis Hospital. He said the doctors told him he had a through-and-through gunshot wound. He was able to be released in a matter of hours.

He said he is lucky to be alive, but what happened that night continues to haunt him.

“All you do is replay the senseless act of violence that took so much of who you are and so much of what you know, away,” he said.