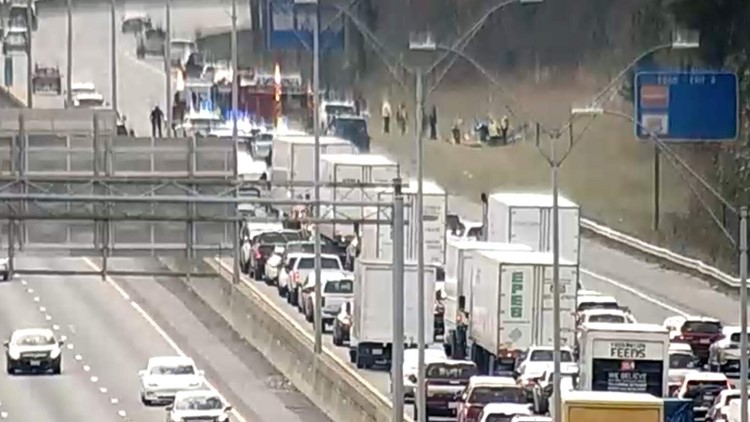 Two people were killed in a helicopter crash along Interstate 77 near Tyvola Road in south Charlotte Tuesday afternoon.

The crash happened around noon between Tyvola Road and Nations Ford Road along the southbound side of I-77. Medic confirmed both victims were pronounced dead at the scene.

Heavy traffic is stacked up on the southbound lanes of I-77 between Tyvola Road and Nations Ford Road.

WCNC Charlotte confirmed the helicopter is a 1999 Robinson R44.

All lanes on I-77 near the crash are blocked while crews respond to the incident. CMPD has closed multiple ramps onto I-77 near the crash. Drivers should avoid the area at this time. Authorities said they expect I-77 in that area will be closed until midnight.

Right now I’m on Nation Fords and Tyvola Rd. The on ramp to I 77 is closed near here. Avoid this area—traffic is close to coming to a standstill.
# pic.twitter.com/bzNsOzP1S2

A witness told WCNC Charlotte it appeared the pilot knew the helicopter was in trouble and made an aggressive move to prevent crashing directly onto I-77.

“I think that he absolutely knew that he was gonna have to put that down,” the man said. “He did his best to put it down … Whoever the pilot was, did their best to put that thing down where it wasn’t going to injure a lot of people, and in that respect, they did a fabulous job.”

You can stream WCNC Charlotte on Roku and Amazon Fire TV, just download the free app.

WCNC Charlotte has reached out to Medic and Charlotte-Mecklenburg police for more information.

This story will be updated once more information is available.

WCNC Charlotte is committed to reporting on the issues facing the communities we serve. We tell the stories of people working to solve persistent social problems. We examine how problems can be solved or addressed to improve the quality of life and make a positive difference. WCNC Charlotte is seeking solutions for you. Send your tips or questions to newstips@wcnc.com.