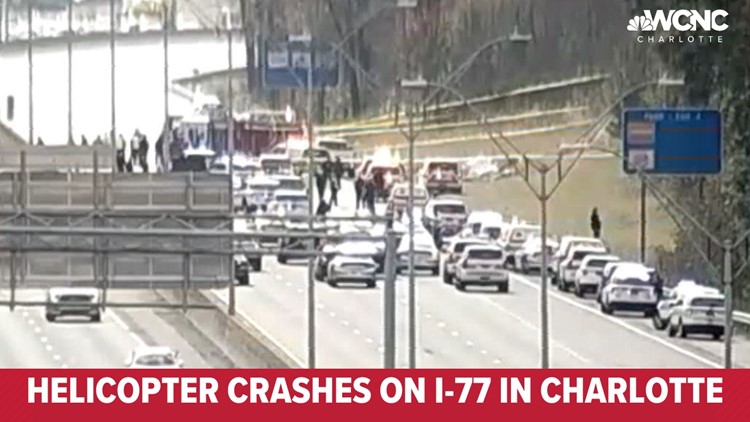 A witness said the pilot appeared to take evasive action to avoid Interstate 77 as the helicopter crashed. It could’ve saved countless lives.

CHARLOTTE, N.C. — A man who saw the moments leading up to a deadly helicopter crash along Interstate 77 in south Charlotte Tuesday afternoon believes the pilot saved lives by taking a last-second maneuver to avoid crashing into the highway.

“My impression is that he apparently knew he was in trouble,” the man told WCNC Charlotte. “He circled looking for a place to put that down. And on the second circle, I don’t think he had any choice, it was going down, and he got it just off the highway and avoided it. That could’ve injured a lot of people. It’s a tragic thing, but in that sense, he did a marvelous job.”

The crash happened just before noon Tuesday. Multiple crews responded to the crash. Two people were pronounced dead on the scene of the crash, which was between Tyvola Road and Nations Ford Road on the southbound side of I-77. Charlotte-Mecklenburg police have blocked access to I-77 in the area of the crash. NCDOT estimated the road will reopen around midnight.

RELATED: Two killed in helicopter crash along I-77 in south Charlotte

The witness said he couldn’t believe what he was seeing as the helicopter circled around before the wreck.

“It looked very aggressive,” he said. “He’s really banking that helicopter around to get a shot of something. But then on his second pass, I knew that something was not right. And he just continued that steep bank until boom, he disappeared out of sight.”

You can stream WCNC Charlotte on Roku and Amazon Fire TV, just download the free app.

“You never know what’s in somebody’s head, but I think that he absolutely knew that he was going to have to put that down,” he said. “Whoever the pilot was, did their best to put that down where they weren’t going to injure a lot of people.”

“The pilot is a hero in my eyes,” Jennings tweeted. “Witnesses indicated that the pilot made diversionary moves away from the highway to save lives. Because of his heroic acts, there were no further injuries or vehicles on the highway involved in the incident.”

WCNC Charlotte confirmed the helicopter was a 1999 Robinson R44 chopper.

Wake Up Charlotte To Go is a daily news and weather podcast you can listen to so you can start your day with the team at Wake Up Charlotte.
SUBSCRIBE: Apple Podcasts || Spotify || Stitcher || TuneIn || Google Podcasts

All of WCNC Charlotte’s podcasts are free and available for both streaming and download. You can listen now on Android, iPhone, Amazon, and other internet-connected devices. Join us from North Carolina, South Carolina, or on the go anywhere.