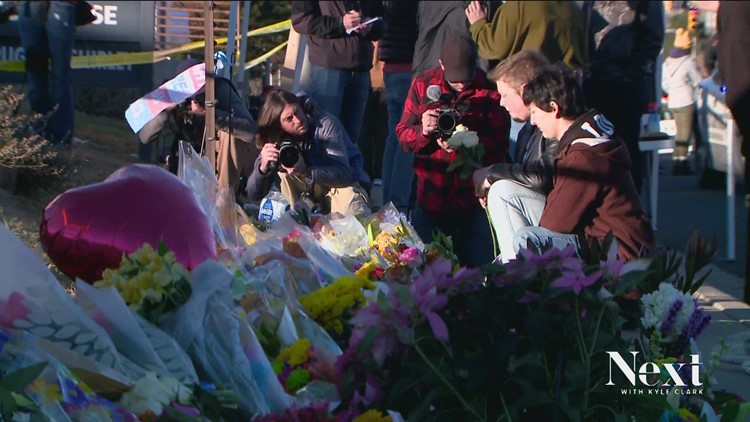 Victim advocates and survivors of Colorado’s mass shooting events recognize the pain facing those affected by the Club Q shooting, and they say healing is life-long.

AURORA, Colo. — On weeks like this, Heather Dearman is drawn to the 7/20 Memorial Reflection Garden in Aurora.

“I tend to come here to find peace and comfort,” she said.

Dearman lost her cousin, Veronica Moser Sullivan, in the Aurora Theater Shooting of 2012. Her cousin Ashley Moser, Veronica’s mother, was shot and paralyzed.

“It immediately took me back to 2012, when the news just kept reporting numbers, and I was personally affected and one of my relatives was the number.”

Dearman leads the 7/20 Memorial Foundation, a group dedicated to providing support to victims of the Aurora shooting and other mass shootings in Colorado and around the country. She said in all of the shootings she’s responded to while supporting victims, she’s found their needs last long after the cameras leave town.

“They’re forced to be on this healing path that never ends,” Dearman said. “It will go on forever.”

“People who are on this road to recovery will have lifetime challenges in perpetuity and they deserve to have resources years later,” she added.

Dearman said some people connected to a tragedy don’t reach out for help in the beginning.

Others who are injured, like Dearman’s cousin, still need help 10 years after the shooting.

“When my cousin Ashley was permanently injured, she received support and help in the beginning, but people who are permanently injured tend to have complications from their injuries years out,” she said. “She’s had several surgeries including this year and there’s just not anyone there who helped her all along the way and that she could call now and help her navigate paperwork and get funding.”

23 years after the shooting at Columbine High School, Heather Martin, a survivor who leads the Rebels Project, a non-profit devoted to helping survivors, says survivors continue to need help.

“The long term needs really run the gamut,” Martin said.  “I have spoken with survivors who have never received help who are just now seeking help.”

Martin said many need expensive trauma therapy. Others who were injured still need help paying for medical care relating to the shooting.

“It’s a lifelong journey… it doesn’t ever go away,” she said.