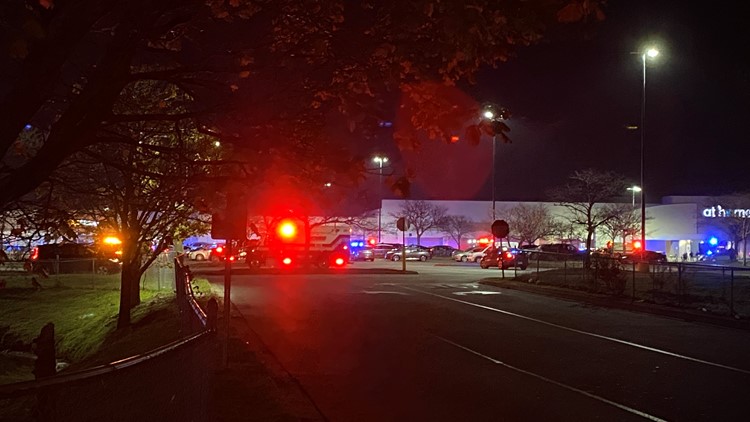 Police confirmed the gunman is dead, and that there were 6 victims killed. ABC News was also able to confirm that the shooter was an employee at the store.

Chesapeake police confirmed that seven people died, including the shooter, at the scene overnight. At least 5 others were hurt and are being treated at SNGH, according to the hospital. Other area hospitals have not confirmed if they are caring for any additional victims.

The City of Chesapeake tweeted that a press conference will be held to discuss the Walmart mass shooting at 8 a.m. at their at the Public Safety Operations Center, which is located at 2130 S. Military Hwy.

A shooting inside a Chesapeake Walmart Tuesday night left seven people dead, including the shooter, according to the Chesapeake Police Dept.

It happened inside the Walmart on Battlefield Boulevard. The call came in just before 10:15 p.m.

Leo Kosinski, a spokesperson with the department, said within 45 minutes after arriving at the scene, police found multiple dead and injured people in the store. Officers put rescue and tactical teams together to go inside to tend to victims, he said.

According to Kosinski, police believe that the shooting had stopped by the time officers arrived. Kosinski said he doesn’t believe police fired shots, but he could not say whether the shooter was dead of a self-inflicted gunshot.

Mike Kafka, a spokesman for Sentara Healthcare, confirmed Norfolk Sentara General Hospital is currently treating five patients from the shooting. 13News Now has reached out to other hospitals in the area but has yet to hear back.

Spoke with a couple Walmart employees who recount having to hide in the bathroom, as they heard shots fired inside the store.

Police officers are still investigating inside the Walmart; however, the shooter was confirmed dead just after midnight.

A law enforcement source told ABC News that “preliminary info is it was an employee, possible manager, went in break room and shot other employees, and himself.” Kosinski could not confirm that information to 13News Now.

The City of Chesapeake has set up a “family reunification site” located at 700 Conference Center Drive. It’s for family members who believe their loved ones may have been inside the Walmart.

Early Wednesday morning, US Senator Mark Warner tweeted that he was “sickened by reports of yet another mass shooting, this time at a Walmart in Chesapeake.”

“I urge all those in the community to listen to guidance from local law enforcement and stay away from the scene,” Warner added in the tweet.

Sickened by reports of yet another mass shooting, this time at a Walmart in Chesapeake. I’ll be monitoring developments closely.

In the meantime, I urge all those in the community to listen to guidance from local law enforcement and stay away from the scene.

Walmart tweeted: “We are shocked at this tragic event at our Chesapeake, Virginia store. We’re praying for those impacted, the community and our associates. We’re working closely with law enforcement, and we are focused on supporting our associates.”

The FBI is assisting in the investigation.

Shortly after midnight, the Bureau of Alcohol, Firearms and Tobacco (ATF) from Washington D.C. said that it was coming to Chesapeake to assist.

We are shocked at this tragic event at our Chesapeake, Virginia store. We’re praying for those impacted, the community and our associates. We’re working closely with law enforcement, and we are focused on supporting our associates.

To read more statements from public officials on this tragedy, click here.

The Virginia shooting comes three days after a person opened fire at a gay nightclub in Colorado, killing five people and wounding 17. That shooter, who is nonbinary, was arrested after patrons at the club tackled and beat them. The shootings come in a year when the country was shaken by the deaths of 21 in a school shooting in Uvalde, Texas and just earlier this month, the deaths of three University of Virginia football players in Charlottesville.

Tuesday’s shooting also brought back memories of another shooting at a Walmart in 2019, when a gunman police say was targeting Mexicans opened fire at a store in El Paso and killed 22 people. Walmart didn’t have a security guard on duty that day.

The Associated Press contributed to this report.