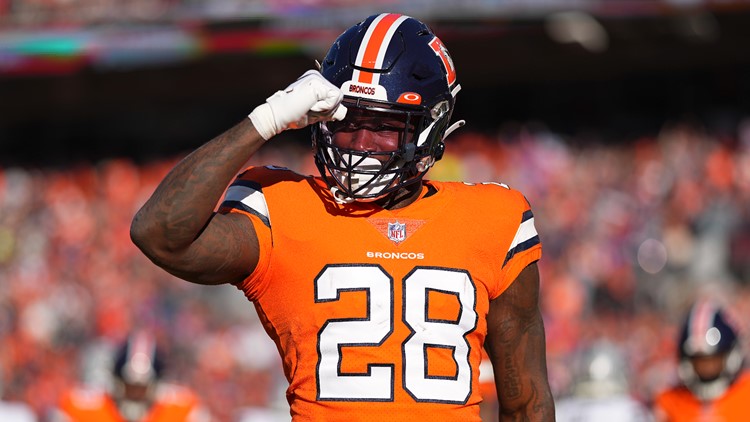 Marlon Mack could see an increased role as Denver’s No. 2 running back.

CHARLOTTE, N.C. — Denver Broncos running back Latavius Murray is expected to see additional carries on Sunday against the Carolina Panthers with Chase Edmunds out with an ankle sprain and the Broncos having released Melvin Gordon earlier in the week because of fumbling issues.

Murray had 17 carries for 49 yards and a touchdown on Sunday against the Raiders along with four receptions for 23 yards. Murray has scored three TDs on the ground in the past four games.

Marlon Mack could see an increased role as Denver’s No. 2 running back.

Gordon fumbled 12 times in his two seasons with the Broncos, losing nine of them. The final straw came when he had a key fumble in last week’s loss to the Las Vegas Raiders.

RB Latavius Murray. With Chase Edmunds out with an ankle sprain and Melvin Gordon having been waived because of fumbling issues, the Broncos are expected to lean heavily on Murray in the ground game. He had 17 carries for 49 yards and a touchdown on Sunday against the Raiders along with four receptions for 23 yards. Murray has scored three TDs on the ground in the past four games. Marlon Mack could see an increased role as Denver’s No. 2 back. Gordon had a key fumble last Sunday in a loss to the Raiders. He had 12 fumbles in two seasons with Denver, nine of which were recovered by opponents.

DE Brian Burns. Burns continues to be a dominant edge rusher for the Panthers with eight sacks, 50 tackles and 14 QB hits. Burns’ numbers may not be among the league’s leaders, but he takes up plenty of double teams and demands plenty of attention from opposing coordinators. The Panthers were offered two first-round draft picks for Burns before the trade deadline, but turned it down.

Broncos P Corliss Waitman vs. Panthers P Johnny Hekker. The Broncos and Panthers rank 31st and 32nd in the league respectively in third down conversions, so it has been a busy season for Waitman and Hekker. Waitman is first in the NFL in punts (58) while Hekker (56) is third. So this could very well be a game where field position plays a big role in what could be a low-scoring game. The Broncos are 32nd in the league in points scored, while the Panthers are 25th.

Denver hopes to get WRs Jerry Jeudy (ankle) and WR KJ Hamler (hamstring) and TE Andrew Beck (hamstring) back this week. Broncos DL Jonathan Harris will not play after suffering a knee injury against the Raiders, so look for rookies Matt Henningsen and Eyioma Uwazurike to see more action. The Panthers could be without LB Cory Littleton (ankle).

The Broncos defeated the Panthers in Super Bowl 50 on Feb. 7, 2016. Denver has dominated the series, winning the past four matchups. Carolina’s only win against Denver came in 2008.

The Broncos have lost six of their past seven games after starting the season 2-1. … Denver is 1-4 on the road. … RB Latavius Murray had a season-high 72 scrimmage yards and a TD rushing last week. … WR Courtland Sutton had five catches for a team-high 80 yards in Week 11. He is going for his third game in a row with at least five catches and 65 yards receiving. … LB Josey Jewell had 11 tackles, a sack and a pass defensed last week vs. the Raiders. … LB Alex Singleton had at least seven tackles in five of the past six games. … DE Dre’Mont Jones has three sacks and five tackles for a loss in his past four games. … QB Sam Darnold makes his first start this season for the Panthers. He was 4-7 as a starter last year with 13 interceptions and nine touchdown passes. … QB Baker Mayfield will be the Panthers backup QB. … Panthers RB D’Onta Foreman struggled last week against a tough Ravens defense, but has been solid overall since replacing Christian McCaffrey in the backfield. Foreman has three games with at least 118 yards rushing in the past five outings. … All three Carolina wins this season have come at home. … If the Panthers fail to win on Sunday it will mark their fifth straight losing season. … Panthers WR D.J. Moore had just three catches for 24 yards against the Ravens and was one of the players interim coach Steve Wilks said needs to step up and make plays. … LS JJ Jansen will tie the team’s record of games played on Sunday (221) currently held by K John Kasay. Jansen is in his 14th season with the Panthers.

QB Russell Wilson has been a disappointment in fantasy football, but this might be a decent week to start him based off history. He has completed 73.7% of his passes for 625 yards passing with four TDs and no INTs in his past two starts vs. Carolina. Wilson has 19 TDs (17 pass, 2 rush) vs. 0 INTs with 128.8 rating in his past six starts vs. the NFC South.