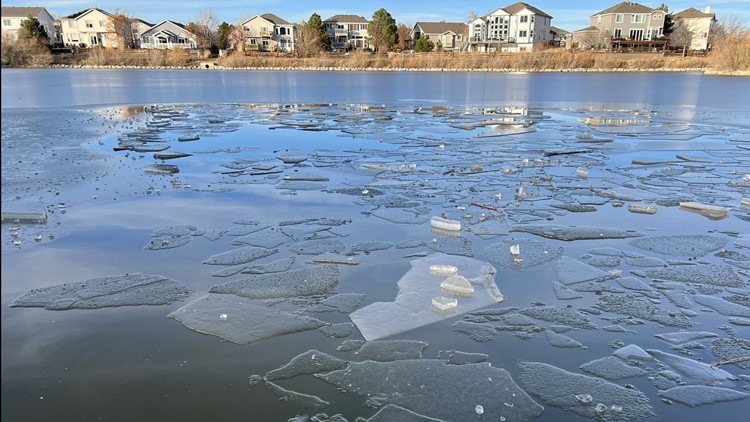 A dive team pulled the young teenage boy out of a Douglas County lake on Tuesday, while three other children got out with help from neighbors.

DOUGLAS COUNTY, Colo. — A boy who was among four children to fall through ice into a neighborhood lake and was pulled out by a West Metro Fire dive team has died, the Douglas County Coroner’s Office said Friday.

A family member said that there will be a vigil for the boy at 6 p.m. Friday at Crystal Lake Park.

On Tuesday, two boys and two girls were on the ice and fell through on Crystal Lake, near Crystal Lake Drive in a neighborhood just north of Roxborough State Park in Douglas County.

A spokesperson for West Metro Fire said they first got the call for help around 2:27 p.m. and that a group of neighbors helped three of the children get to safety using hoses, extension cords and ropes. A West Metro Fire dive team pulled out the fourth child – a young teenager.

The dive team pulled out the boy by about 3:06 p.m. He was taken by ambulance to a hospital, the spokesperson said.

The three other children were OK after their ordeal, according to West Metro Fire. Once they got out of the water, Kristi Saine, who lives in a home that borders the lake, said she brought the three children into her home to warm up, change clothes and take showers.

“It was sad. Their hands were purple. Their feet were frozen,” she said. “At first I honestly didn’t know what to do, but I just knew I had to get them out of their wet clothes and get them warm.”

4 kids fell through ice into lake, 1 taken to hospital