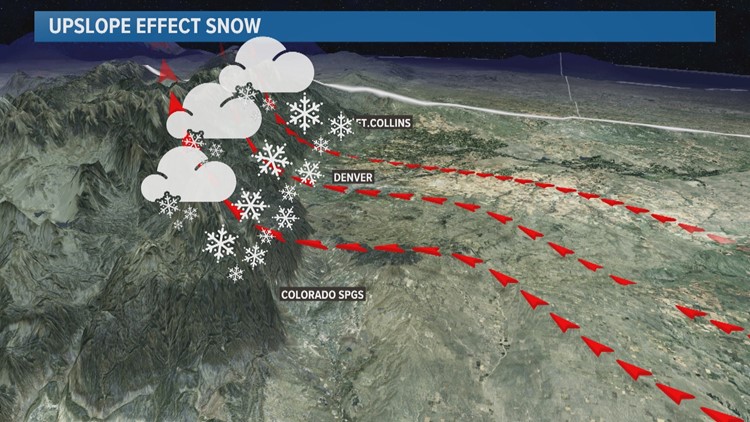 The Denver area has also seen 30 to 80 inches of snow with a single storm. We call it the upslope effect.

DENVER — The record-breaking ‘lake effect’ snowfall in the Buffalo area last weekend can be compared to historic storms on the Front Range caused by the “upslope effect.”

The snow totals around the Buffalo area were very localized, ranging from 80 inches to just 6 inches over 45 miles.

It was caused a phenomenon known as the “lake effect.” The cold air in that storm moved over of the relatively warm 50-degree water in Lake Erie. That caused the moist air over the lake to rise rapidly while the winds channeled it into a single band intense snow.

On the Front Range of Colorado, there is a similar phenomenon that creates very localized snow in about a 45-mile radius from the city of Denver. It’s known as the “upslope effect.”

It happens when a storm changes the wind direction on the plains to go from east to west. The mountains become a dam, causing the moisture in the air to pool right over the Front Range. The slope of the mountains causes the moist air to rise more rapidly, which creates an intense band of snow.

There have been some big upslope snow events on the Colorado Front Range, that can rival Buffalo’s record-breaking weekend.

Last Sunday, Buffalo ended up with 36.7″ inches of snow, which is measured at the Buffalo-Niagara International Airport located in the east metro. The biggest total was in Orchard Park about 10 miles southeast of Buffalo, and there was just 7.8 inches measured in Batavia about 40 miles east.

The biggest upslope storm on the Colorado Front Range was way back in 1913. Denver got 45.7 inches of snow, while 40 miles west, Georgetown got 86 inches of snow, and 45 miles northeast in Greeley there was 8 inches.

And last year’s March upslope blizzard hit Denver with 27.1 inches. 41.3 inches fell in Blackhawk 25 miles west to the west, and 14.7 inches of snow fell in Greeley.