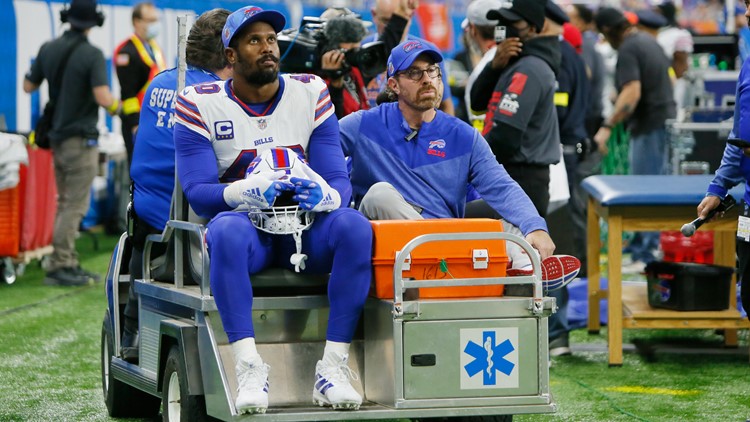 The 33-year-old entered the game tied for 10th in the NFL with eight sacks.

DETROIT — Buffalo Bills edge rusher Von Miller injured his right knee in the second quarter and was ruled out for the rest of the game against the Detroit Lions.

Coach Sean McDermott said he didn’t have any injury updates after the Bills beat the Lions 28-25 Thursday.

Miller had his right leg stepped on inadvertently by Detroit center Frank Ragnow while he was blocking another player. He was evaluated on the sideline and was taken on a cart from the sideline to the locker room. Miller had one tackle and was credited with hurrying quarterback Jared Goff before leaving the game.

You can see the tibia of Von Miller’s right knee shift forward then back as the knee moves in. That mechanism would suggest ACL injury pic.twitter.com/gSuFcrnBTF

God plz watch over @VonMiller !!! Place your hands over him Lord. I ask that it not be anything too serious. I love u brother prayin hard!

The 33-year-old Miller entered the game tied for 10th in the NFL with eight sacks.

His injury was another setback for a banged-up defense that was without injured defensive ends Greg Rousseau and A.J. Epenesa along with linebacker Tremaine Edmunds.