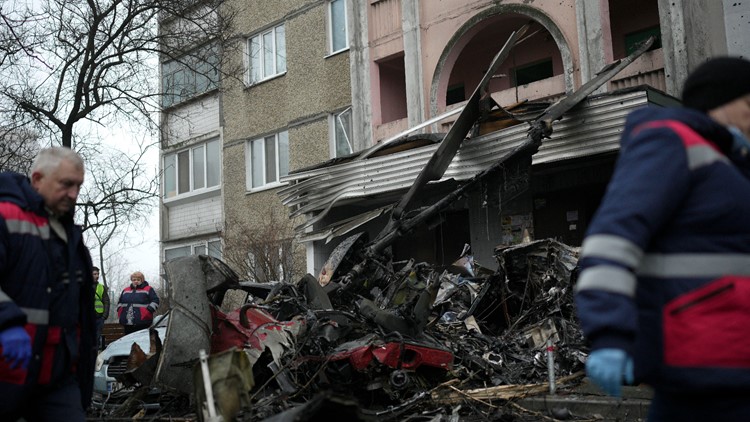 The cause of the crash was unclear Wednesday morning, but it comes days after a deadly Russian attack on an apartment building that killed 45.

There was no immediate word on whether the crash was an accident or a result of the war with Russia. No fighting has been reported recently in the Kyiv area.

Interior Minister Denys Monastyrskyi, his deputy Yevhen Yenin and State Secretary of the Ministry of Internal Affairs Yurii Lubkovych were among those killed, according to Ihor Klymenko, chief of Ukraine’s National Police.

Monastyrskyi, who was in charge of the Ukrainian police and other emergency services, is the most senior Ukrainian official to have died since the start of the war with Russia almost 11 months ago.

Nine of those killed were aboard the emergency services helicopter that crashed in Brovary, an eastern suburb of the Ukrainian capital, Klymenko said.

A total of 29 people were injured, including 15 children, the regional governor said.

“For now, we are considering all possible versions of the helicopter crash accident,” Ukraine’s prosecutor general, Andriy Kostin, said on Telegram.

The investigation is being carried out by the Security Service of Ukraine, he said.

Forum President Borge Brende requested 15 seconds of silence after opening the session to honor the Ukrainian officials killed in the crash.

The crash came just four days after a Russian missile strike on an apartment building in southeastern Ukraine killed 45 civilians, including six children — the deadliest attack on civilians since the spring.

“Haven’t had time to recover from one tragedy, there is already another one,” said the deputy head of the Ukrainian presidential office Kyrylo Tymoshenko.