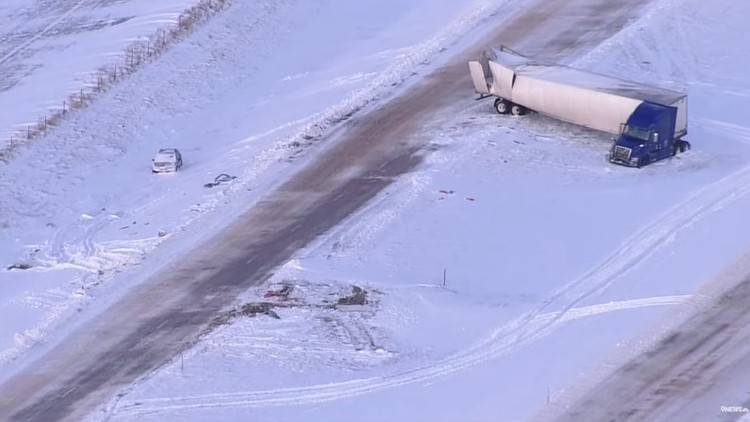 Interstate 70 is closed between Airpark Road and the Kansas state line due to a crash in Strasburg, according to CSP.

COLORADO, USA — Interstate 70 remains closed between East Airpark Road and the Kansas state line due to a multivehicle crash Wednesday afternoon, according to the Colorado State Patrol (CSP).

CSP said in a tweet at 2:19 p.m. Wednesday that the crash involved at least nine semi-trucks and 12 passenger vehicles. No injuries were reported, CSP said.

Drivers should avoid the area and take an alternate route.

There was no estimate for how long the closure would continue, but CSP said drivers should expect an extended closure of the interstate. Troopers on the scene said it could take until Thursday morning to clear the crash, CSP said.

Alternative routes in the area were not recommended because they continue to be dangerous due to high winds and slippery roads, according to CSP.

I 70 is still shut down for safety reasons. Unknown timeframe when it will reopen. Troopers on scene believe it will take until morning to clear crash. Alternate routes not encouraged in the area because they will still be dangerous due to high winds and slick roads. pic.twitter.com/Z5ZrNv3lvk

The Colorado Department of Transportation (CDOT) said in a tweet at 2:20 p.m. that there is heavy traffic between CO 9 and C-470.

#I70 eastbound: Heavy traffic between CO 9 and C-470. Expect up to 90 minutes travel time. https://t.co/YpKAMlXDDY

This is near I-70 and Powhaton Rd. I-70 @ 292 Airpark remains closed. Please consider alternate routes, or waiting this out closer to I-70 and Tower Rd. This is not getting easier to travel. More vehicles are creating more problems. pic.twitter.com/MgWmCpqifQ