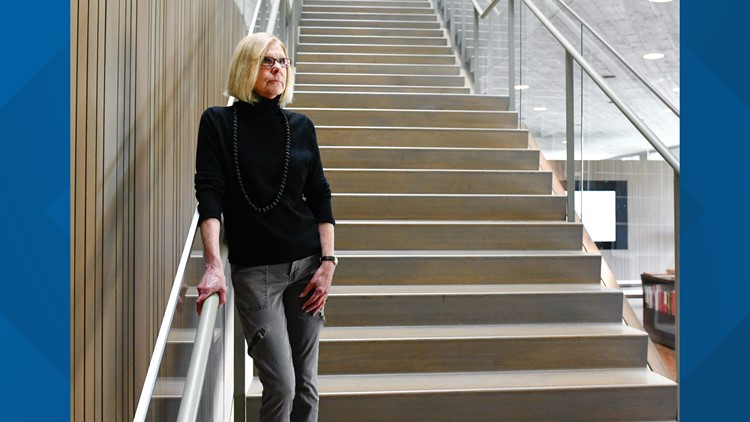 DENVER — Christoph Heinrich had arrived in town in 2007 as the new director of the Denver Art Museum – and one of the first people he met was Mary Voelz Chandler, the art and architecture critic at the Rocky Mountain News.

“I was new in town,” Heinrich said, “and then really appreciated – and learned to appreciate – her great work as a journalist, covering a lot of what we’ve done here at the museum.”

Heinrich is among those mourning after Chandler’s death last week from esophageal cancer. She was 74.

Survivors include her brother, Eric Chandler; her sister, Lenore Voelz Augustine; one nephew, Anthony Augustine, and his wife, Melissa; and a great-nephew, Luke Augustine.

Her many friends plan to celebrate her life at the Denver Press Club at 6 p.m. Friday.

After working at newspapers in New York, Virginia and Florida, Chandler came to Denver in the mid-1980s and joined the Rocky as a general assignment entertainment reporter in 1987. She started writing about art and architecture in 1990 and continued until the paper closed in February 2009.

She later worked for an architectural firm and a construction company before beginning her own blog, Chandler In Denver, in 2018. She focused on the same issues – art, architecture and historic preservation.

Chandler was known for meticulous research, and for saying what she felt, whether it was in the Rocky newsroom or in her column.

Heinrich said he came to value the role of a critic even if he didn’t always agree an individual take on a piece or art or a style or architecture.

“You know,” Heinrich said, “an art critic is maybe a little bit like a coach. I’ve never done any group sports, but I imagine the process when you’ve done your game, there’s somebody in the locker room and tells you, you really didn’t do well, or this was amazing. And maybe next time you try this.”

When the Denver Art Museum built the Hamilton Building, with its stunning prow extending above West 13th Avenue, Chandler turned her observer’s eye to the project.

“The architecture part, I think, was very close to her heart,” Heinrich said. “And she, I think, was following curiously what all we going to do with this crazy building. … Of course, when it opened in 2006, a lot of people were scratching their heads or saying, ‘what on earth are you going to do with this?’ And Mary was definitely the one who followed what we did with it and encouraged us as well.”

She was known for observing – and writing about – the work of little-known artists and masters alike.

“From the smallest co-op gallery, where you would see her at the opening with a glass of red wine in her hand, to a big museum show, she always would be there,” Heinrich said. “She would mingle. And I think something which makes her so remarkable is she loved Denver. She was not a Denverite. She became one, and she really embraced this community and wanted it to be the best it could be.”

Chandler could be blunt during a discussion in the newsroom – and blunt in what she wrote.

“She was not there for niceties,” Heinrich said. “She had a great sharp wit, so she would make an observation, and then if you would point it out to her, she would say, ‘Well, I have eyes, I’ve seen that.’ Or maybe she would even say, ‘I’ve seen that better.’”

Michael Paglia, an art historian and writer whose column appears in Westword, met Chandler in the late 1980s and was a close friend for the past 30 years.

“I think she was one of the most conscientious writers on any topic that I have ever known,” Paglia said. “She was no-nonsense. She had enormous influence in the world of art and architecture here in Denver.”

He recalled their joint – but ultimately unsuccessful – effort to save the I.M. Pei designed Zeckendort Plaza and its signature paraboloid. During one meeting, Ron Williams, one of the developers, scoffed at the notion that the structure was “historic.”

Chandler quoted him: “If it’s historic, I’m pre-historic.” Then she followed up with this: “That sums up the attitude pretty well.”

Jim Robischon of Robischon Gallery called her “truly a significant contributor to our city for decades.”

“It’s a huge loss, really,” he said. “For the city to have a voice, so strong, so opinionated, so witty, so well-informed and to lose this voice – I think that’s definitely something that leaves a void. And you only can hope that there are young people in the trenches that can fill that void in the future.

“But as someone who is doing culture, working on culture, preparing projects, you really need good critics – no question. And Mary was definitely one of the best.”

Contact 9Wants to Know investigator Kevin Vaughan with tips about this or any story: kevin.vaughan@9news.com or 303-871-1862.