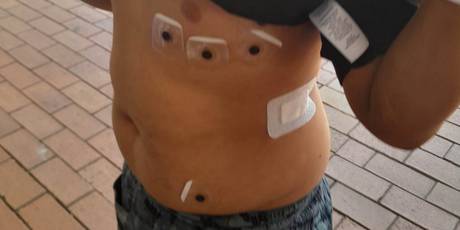 A woman claims this 10-year-old was tasered by police. Photo / Supplied

Police have responded to claims a 10-year-old boy was tasered in Rotorua on Friday, saying a Taser was deployed against a “young person” who allegedly attempted to stab an officer.

A woman claiming to be a relative of the boy made the allegation on social media and in messages to the Herald, providing a picture of a plaster on a torso and an ACC form showing a claim for a 10-year-old with the cause of injury listed as “taser fired by police”.

In statements to the Rotorua Daily Post, police said they were alerted to a family harm incident outside a property on a central Rotorua street at midday last Friday.

Police alleged that when “staff arrived minutes later, a person attempted to stab one of the officers with a knife – this officer was arresting another individual at the time”.

“A Taser was deployed towards the [person with the knife] but was not successful. The person was taken to hospital for assessment.”

The statement said none of the attending officers was injured and they “did an extremely professional job keeping everyone safe”. Investigations into the incident continued.

Following further questions, police clarified the Taser was “deployed against a young person, who is going through a youth process”.

Police were asked to confirm the person’s age.

Two women were arrested; one received a formal warning and the other was being referred to Te Pae Oranga – a tikanga and kaupapa Māori and restorative justice process.

Police said any time an officer deployed a Taser after a risk assessment, they must complete a Tactical Options Report detailing the circumstances in which the officer believed the action was necessary to keep people safe.

The report and the Taser footage would be reviewed by the officer’s supervisor and then the Area Commander.

Police announced in 2015 that all frontline officers would carry Tasers, also known as stun guns.

Asked on Saturday for an update on the condition of a 10-year-old boy tasered, a Rotorua Hospital spokeswoman said: “The patient was discharged from ED the same day.”

NZME has attempted to further contact the woman who posted about the incident.